OTC derivatives clearing volumes in the US have doubled since January, new aggregated data from three central counterparties (CCPs) shows.

The aggregated open interest volumes of cleared OTC derivatives – interest rate swaps (IRSs) and credit default swaps (CDSs) – sat at US$10.7 trillion in January and rose to US$20.6 trillion by June 3. See Aite’s chart below. 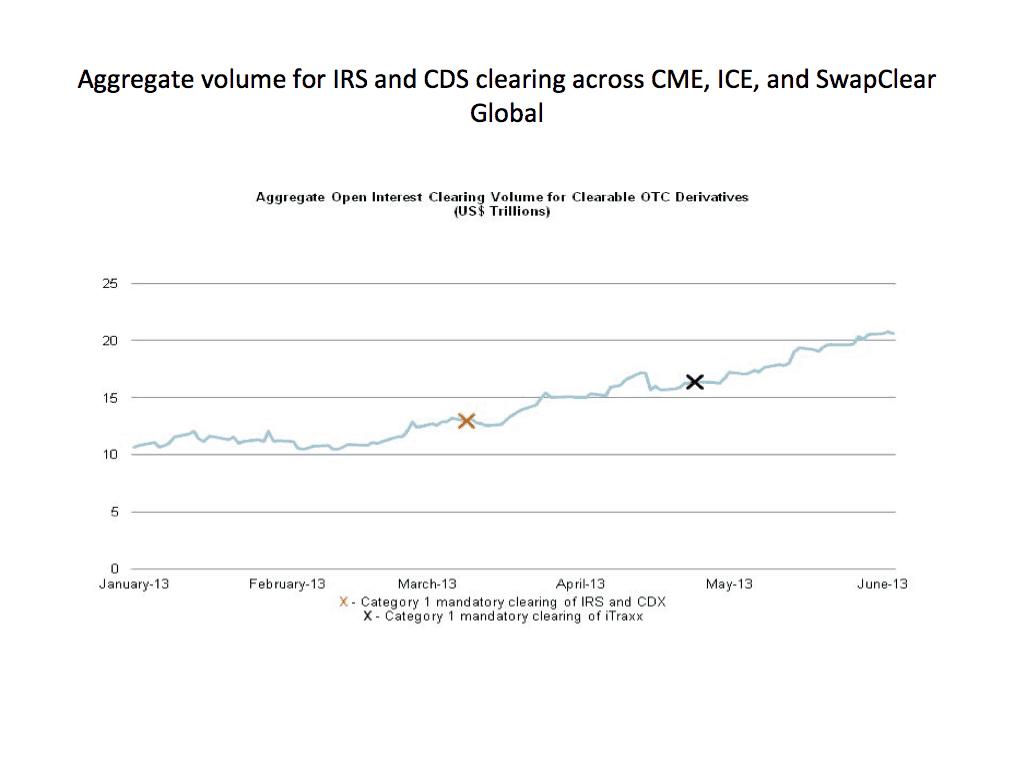 Earlier this year, data reported to the Depository Trust and Clearing Corporation showed a similar jump, but the aggregated CCP data gives a more holistic view of the market as it adapts to swaps clearing rules.

Analyst Virginie O’Shea said it was interesting to see an overall uptake over the past six months in clearing volumes. “Market volumes are down in derivatives on the previous year, so I assumed that it wouldn’t go up as much.”

Under the US’ Dodd-Frank Act, OTC derivatives must be cleared through a CCP. Brokers began clearing IRSs and certain CDSs in March and iTraxx CDS indices in late April.

Institutional investors have had to clear OTC derivatives since 10 June, while the last deadline for all other market participants is 9 September.

O’Shea said the increase in clearing volumes was mostly driven by CME and SwapClear because of the IRS market, while ICE’s volumes have been “very flat”.

“CDS indices are not massive in terms of volume though. I think people may have been moving away from those instruments rather than clearing them,” she said.

“People may be going towards using futures for hedging, or moving over to IRSs.”

O’Shea said the US figures will serve as an outline for activity in Europe when clearing requirements under the European market infrastructure regulation (EMIR) take effect.

“EMIR is broader, encompassing more of the derivatives market, so it should be good to see whether there is similar pattern, or if certain categories decrease,” she said.