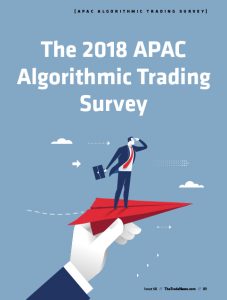 While Europe has spent much of the past year grappling with the impact of MiFID II and its effect on algorithmic trading, Asia-Pacific (APAC) has instead continued to experience increasing improvements.

Respondents to this year’s survey scored algo providers higher than any of the previous five years across every category, with an overall survey-wide average of 5.81.

This compares favourably to the results of The TRADE’s global algo trading surveys conducted earlier this year, which scored an average of 5.57 although respondents were more likely to be critical due to the pressures of MiFID II in Europe and, to some extent North America, than in APAC.

While none of the functionalities reviewed in this year’s survey scored as high as 6.00 (out of a possible 7.00) – both the improving trader productivity and ease of use categories were closest to doing so, each being scored 5.98 by respondents – while none of the categories scored lower than 5.50.

While there were no specific areas of stand-out performance in this year’s survey results, it appears that APAC respondents are generally pleased with both the product and service they are receiving from their algo providers.

What is most revealing about this year’s survey results is how far algorithm provision has come in just a few short years, at least according to APAC respondents. In the 2015 edition of the survey, the average score was just 5.22, with only one category scoring higher than 5.40.

Larger buy-side firms (those managing more than $10 billion) have cut down their average number of providers compared to recent years, going from as many as 4-5 algo providers, to just 1.58 for those managing between $10 to $50 billion, and 2.41 for those with more than $50 billion in assets under management.

This trend is by no means restricted to the APAC region, as buy-side firms globally have begun to cut down the number of technology vendors in recent years – including algo and EMS providers – they engage with, as regulatory and operating pressures continue to squeeze cost margins.

There was further consolidation of algo providers among small and mid-cap respondents, with the exception being firms with between $.025 and $0.5 billion, which on average are using almost four algo providers, an increase of 1.17 on last year’s results. In years past, it was the well-resourced buy-side firms that would have a stable of algo providers to choose from, whereas the smaller firms displayed greater prudence; that ratio is now reversed, and it will be interesting to see how it unfolds going forward.

The results of the survey also underlined how important algorithmic trading has become to APAC buy-side firms in recent years, with more respondents than ever using algos to execute their flows. The level of firms using algos to trade more than 40% of their flow rose consistently between 2013 and 2016, before experiencing a drop last year to 42.57%.

Overall, the results of this year’s survey show that APAC algo trading is growing in terms of both quality of algorithms and popularity among buy-side firms, with little to suggest that this trend will be curtailed any time soon. While the rest of the world struggles to adapt to new regulatory regimes, APAC may be well-positioned to take the lead on algorithmic trading in the years to come.

The 2018 APAC Algorithmic Trading Survey can be read in full here.