Battle for the trading desk

This special digital feature from The TRADE and Global Custodian takes an in-depth look at outsourced trading and its impact on the buy-side.

LAUNCH THE FEATURE LENGTH VERSION IN HERO PLAYER BELOW 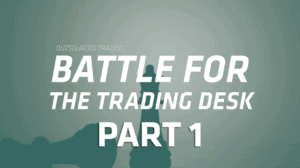 In the first episode of this highly-anticipated digital feature, we outline what outsourced trading is, exploring the various models and arrangements that can be adopted, before uncovering whether outsourcing execution can actually save money for asset managers. 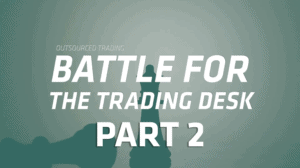 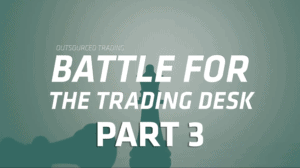 After exploring how providers manage potential conflicts of interest in part two, the final part of this digital feature looks at other complex issues that outsourced trading presents, before concluding with thoughts on how the trend will impact buy-side traders in the future. 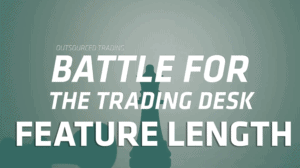 This special digital feature from The TRADE and Global Custodian takes an in-depth look at outsourced trading and its impact on the buy-side.

Buy-side traders believe their front-office execution team can still give asset managers a competitive edge, while others believe a third-party can either supplement or replace the trading entirely, for the better of the business.

A long-serving function of the active asset management industry, considered by many a jewel in the crown, trading desks now face arguably their biggest challenge yet in the form of outsourced trading desks. Born out of industry headwinds and changes in market structure, the trend has sparked c-suite interest as an alternative to the centralised trading desk.

But the trading desk is not a function destined to transition quietly into the outsourced world.

The TRADE and Global Custodian are proud to present this first of its kind digital feature exploring the development. With exclusive interviews from outsourced trading providers such as BNP Paribas, Cowen, Stone X Group, TORA and Wells Fargo, alongside views from current and former buy-side heads of trading, we throw light on some of the burning issues that encompass the outsourced trading trend.

With thanks to our partners