The planned launch of a new bond trading system for US high-yield bond instruments next month offers potential evidence of a trend towards sell-side disintermediation in the fixed income market.

But despite an increasingly tough business environment for fixed income dealers a substantial reduction in their role is unlikely to meet the needs of the market.

Having first launched in Europe just over two-and-a-half years ago, Vega-Chi, which was set up by former Goldman Sachs trader Constantinos Antoniades, is planning to debut its first US venue on 24 October. The platform will have 45 buy-side clients ready to trade corporate bonds on day one and expects to have 80 members within five months of going live.

“Within the last two years there has been a big shift in the structure of the fixed income market, as the commercial models of banks come under threat and buy-side demands increase,” Antoniades told theTRADEnews.com. “We are attempting to address this mismatch with a solution that lets the buy-side transact with each other directly.”

Globally, the ability to the sell-side to facilitate the buy-side’s bond trading activity by committing capital is already diminishing due to new measures in Basel III, the latest set of standards to ensure banks are adequately capitalised. The rules will require brokers to hold risk-weighted capital against some instruments held on their balance sheets.

US banks also face further restrictions through the Volcker rule, a ban on proprietary trading proposed by former Federal Reserve chairman that was included in the Dodd-Frank Act, which could also have extraterritorial reach.

While banks gear up for this shift, Antoniades believes attitudes on the buy-side are also changing, as investment into fixed income increases and the demand for more electronic bond trading solutions escalates.

According to data from Strategic Insight, an Asset International company, US$5.8 billion was invested in US equities by US mutual funds in June and July combined, compared to an investment of US$52.1 billion in US bonds in the same period.

Cutting out the middle man

Antoniades also believes the buy-side is waking up to the amount of money they can save by trading directly.

“Banks have made hundreds of billions on high-yield bond transactions over the last ten years,” he said. “The buy-side are much more aware that they can trade directly, without the use of a bank, at a fraction of what they are used to paying and pass these savings back to their clients.”

So where does the future of the sell-side lie when it comes to fixed income trading? In corporate bonds, banks now hold just 1% of overall liquidity compared to 7-8% historically (see graph). 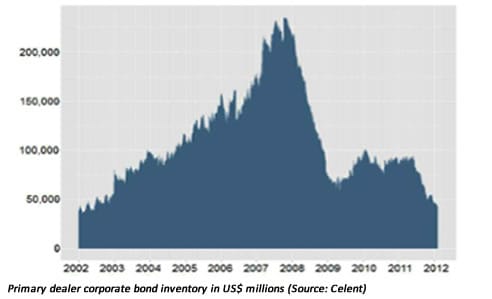 But Antoniades believes these only target certain portions of the market and that banks are more keen to sustain their core role in the fixed income market for as long as possible. Goldman Sachs’ G Sessions platform runs infrequent auctions for corporate bonds while UBS’ PIN venue is solely focused on credit default swaps.

“My guess is that the sell-side will try to hold on to their business and try to maintain their margins rather than cannibalise their businesses through lower transaction fees,” he said. “Some banks have tried to introduce automated solutions but have so far been limited in the scope of instruments or style of trading they offer.”

But according to George O’Krepkie, CEO of fixed income platform Bonds.com, cutting out the sell-side could pose more challenges than it solves.

Bonds.com offers a central marketplace for all market participants and currently counts over 200 brokers and 800 buy-side firms among its members. Dealers are able to stream prices in the bonds they want to trade, removing the need for them to back client trades with their own capital.

“Cutting dealers out isn’t really the right model in my opinion,” said O’Krepkie. “Dealers will find ways to tackle the new market structure that is evolving for fixed income, and are more like to favour the ability to post prices on a central utility. Fragmenting the market between dealers and the buy-side will only exacerbate the hunt for liquidity.”

O’Krepkie stressed relationships with dealers will be crucial for those that want to trade bonds discreetly and in size, with platforms that allow participants to post prices offering more value for smaller-sized and more liquid orders.

Moreover, as new platforms for fixed income instruments continue to emerge and facilitate the trading of smaller orders, the technology needed to navigate the market will bear similarities to equities.

“We have seen large buy-side houses hire equity traders to their fixed income desk in order to learn and capitalise on trends towards the greater use of algorithms and smart order routing,” said O’Krepkie. “The explosive growth in the exchange-traded fund market for bonds has also brought in new types of fixed income players that trade algorithmically.”