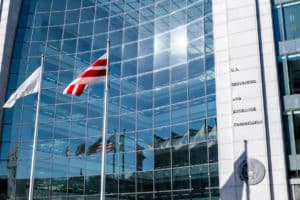 Mark T. Uyeda has been sworn into office at the Securities and Exchange Commission (SEC) as a commissioner by Brian Johnson, assistant director of the division of investment management’s rulemaking office.

President Biden nominated Commissioner Uyeda earlier this year and he was confirmed by the US Senate on 16 June.

His appointment will run until 5 June next year and makes him the first Asian Pacific American to serve as a Commissioner at the SEC.

Commissioner Uyeda originally joined the SEC in 2006 and has since held a variety of roles including senior advisor to chairman Jay Clayton, senior adviser to acting chairman Michael S. Piwowar and counsel to Commissioner Paul S. Atkins, among other staff positions in the division of investment management.

Most recently, Commissioner Uyeda served on detail from the SEC to the Senate Committee on banking, housing and urban affairs as a securities counsel to the committee’s minority staff.

“Mark brings extensive experience in corporate and securities law, including the past 15 years as our colleague at the SEC,” said Gary Gensler, SEC chair.

“I look forward to working with him to advance our mission to protect investors, maintain fair, orderly, and efficient markets, and facilitate capital formation.”

Before joining the SEC, Commissioner Uyeda served as chief advisor to the California Corporations Commissioner – the state’s securities regulator, and as an attorney at law firms K&L Gates in Washington, D.C. as well as O’Melveny & Myers in Los Angeles.

“I have the highest respect for the SEC as an institution and look forward to working with my fellow commissioners and the SEC’s dedicated and hard-working staff to protect investors and facilitate economic opportunities for all Americans,” said Commissioner Uyeda.