The TRADE > News > Regulation > Are you a dove or a hawk? Place your bets on the Fed rate hike now… 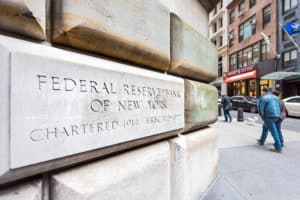 It’s been more than three years since the Federal Reserve last raised its rates, with a policy of quantitative easing and massive bond buy-backs to steer the economy through Covid keeping the US interest rate at zero since 2018.

But with the economy (despite the Russia-Ukraine war) on the mend, and inflation soaring (up almost 8% in February alone), the powers-that-be have signalled for some time now their plans to start tightening up monetary policy to tackle inflationary pressure and rising prices… and the markets are waiting on red alert to see what happens.

“The Fed’s meeting tomorrow evening is as highly anticipated as any meeting in recent memory,” Shane O’Neill, head of interest rate trading at Validus Risk Management, told The TRADE.

The January Federal Open Market Committee (FOMC) Meeting saw Fed chairman Jerome Powell shift to a decisively more hawkish stance, and at the start of March he made his plans even more clear, confirming in his bi-annual testimony to the House Financial Services Committee that: “We expect it will be appropriate to raise the target range for the federal funds rate at our meeting later this month.”

But the question is how big the hike will be, and how many more will come. Powell has referred to a “series” of hikes, with the first likely to be relatively mild, based on market response and economic conditions. “I’m inclined to propose and support a 25bp rate hike,” he said to the House. “The bottom line is that we will proceed, but we will proceed carefully as we learn more about the implications of the Ukraine war for the economy.”

Most people appear to be pricing in a 25bp rise for tomorrow, with a further series building up for the rest of the year. And this could be a big deal – a quarter point rise is one thing, a 200bps jump is entirely another. So how much can we expect, and how quickly might it come?

In January, the markets were running scared, pricing in as much as a 90% chance of a 50bps increase – which would be the Fed’s first half point rise since 2005. Things have calmed down a bit since then, but Bloomberg points out that the highly sensitive two-year Treasury yields have climbed to their highest since September 2019, suggesting that (given the additional pressures of rising commodity prices and geopolitical uncertainty) a bigger single jump could still be on the cards for later in the year.

With six FOMC meetings left in 2022, and at least five hikes (and possibly more) expected, we could see a serious change of pace. Is the market ready for this?

“Before the start of the war in Ukraine markets were expecting six 25bps hikes from the Fed this year, that number is now up to seven and the main question will be – is this enough?” asked O’Neill.

“Tight labour markets and stubbornly high inflation were the factors pushing the Fed’s hand to embark on a hiking cycle to attempt to prevent inflation expectations becoming embedded in the mind of the consumer, leading to a wage/inflation spiral. If this was justification for six hikes and the war has, undoubtedly, made inflation matters far worse, then is one additional 25bps hike going to do the trick? Energy, food and metal prices are all at multi-year highs thanks to the war in Eastern Europe, with some commentators pushing peak inflation expectations in the US to almost double digits – with this backdrop, the risk tonight is skewed toward a more hawkish rather than more dovish Fed.”

Inflation will be the driving factor in any decision – but it’s also worth remembering that any discussion over interest rate strategy is also likely to be affected by the extent to which price increases are driven by commodity prices and geopolitical volatility, and how far by consumer demand. If the former, then raising rates could potentially cause considerable pain for relatively little gain, at least in the short-term.

Either way, Steve Doire, strategic client and platform advisor at Clearwater Analytics (which recently conducted a survey of over 100 firms representing more than $5 trillion in AUM), warned that the uncertainty is already having a strategic impact.

“With interest rates entangled with inflation, our research shows that a large majority, but not all, institutional asset managers expect a 100-200bps increase from current rates.  All these concerns are driving changes to portfolio allocation and risk,” he told The TRADE.

“The prevailing view that we are in a transitionary inflation cycle has unequivocally shifted. With our research showing nearly half of asset managers predicting that CPI will settle in at 3-4%, there is a clear move to developing more aggressive investment strategies focused on commodities and real estate. As inflation continues to climb, investing in illiquid real assets like real-estate could potentially deliver higher yields for asset managers.”

The biggest impact is of course likely to be commercial – higher rates mean higher prices, on both sides of the fence.

“This Fed rate rise will increase costs for anyone trading the capital markets, not least in terms of funding trades,” said Daniel Carpenter, head of regulation at Meritsoft (a Cognizant company), speaking to The TRADE. “Even with interest rates still at historically low levels, some of the biggest financial institutions have been losing double digit millions in unrecovered failed funding costs. Any trader looking to borrow to finance a trade now has to factor in these higher interest charges.”

One concern is that a prevalent strategy used to minimise funding costs is buying and selling the same contractual settlement date, in order to stay flat, and with the intention of meeting the costs from the sales proceeds. However, if a trade fails to settle for longer than this, the bank will need to carry those extra funding costs, which will inevitably erode the profitability of the trade.

As always, preparation is key.

“Trying to work out the many effects of the Fed’s imminent monetary policy decision is difficult, but like those with a variable mortgage, trading desks are impacted. Late settlement means higher funding and higher rates means the additional funding costs more,” said Carpenter.

“Preparing now to handle the trading cost impact of this small rise and the upwards trend is exactly what’s needed to ensure banks are ahead of the curve whenever the Fed decides to hike rates again in the future.”

Parity across the pond

It is worth noting that the Bank of England is also expected to raise rates next week, for the third time since the pandemic began, while the European Central Bank (ECB) is also edging towards further 2022 rate increases, bringing pressure to bear on both sides of the pond.

UK inflation hit 5.5% in January and is likely to climb even higher following the impact of the Ukraine invasion, making further hikes almost inevitable. The central bank raised rates by a quarter point to 0.5% in February this year, but it was a tight choice, with four out of the nine committee members voting for a more aggressive 0.5% increase to 0.75%, raising the very real possibility that given current conditions, we could see a bigger jump coming next week, given current conditions.

“Last week’s ECB meeting caught markets off-guard with a more hawkish bent than expected,” added O’Neill. “The ECB is the central bank with most reason to be cautious regarding rate hikes as they are the most economically exposed to the conflict, so if they were still willing to present a hawkish front, there seems little to stop the Fed going that much further.”

Whatever happens, it looks certain that we are heading for a higher cost future. The only question now is how aggressively the authorities will handle their task. And it is worth remembering that interest rates are not their only tool. Balance sheet normalisation (“quantitative tightening”) is also on the cards, and both the Fed and the Bank of England have indicated intentions to reduce their bond purchases going forwards.

However, not everyone is keen, with some calling for it to play a bigger role in place of higher hikes, while others are urging caution, for fear of seeing Treasury market disruption similar to that experienced back in summer 2013 and again in late 2019.

“Longer-end rates, those most effected by QT actions, have had quite a March – 10-year Treasury yields have jumped more than 40bps in the last month, with further volatility potentially down the road, should the Fed reduce its balance sheet more aggressively than expected,” warned O’Neill.

“With a major war playing out in Europe, Covid resurgence in Asia, and inflation coming from internal and external factors – the Fed’s task is unenviable, and the entire rates curve is liable to shocks and large, sustained bouts of volatility.”