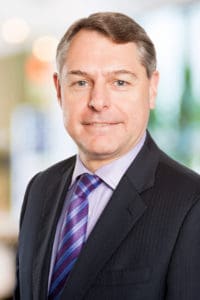 Hayley McDowell: What progress has been made in creating a global reporting framework for over-the-counter (OTC) derivatives transactions and what challenges remain to be solved?

Chris Childs: There has been a huge amount of progress in terms of going from little transparency in OTC derivatives markets to greater insight into where risk lies in the system, however further work remains to be done in order to truly deliver upon the G20 goals of greater transparency and risk mitigation. As Chairman of the Commodity Futures Trading Commission (CFTC), Chris Giancarlo, recently stated, “Of the many mandates to emerge from the financial crisis, visibility into counterparty credit risk of major financial institutions was perhaps the most pressing. The failure to accomplish it is certainly the most disappointing.”

With regards to the problems that remain, there has been a lack of harmonised reporting requirements across jurisdictions.  Data elements, and standards, in terms of what is reported, by who and when, are very different.  This has made amalgamating and diving into that data extremely challenging for regulators.  That said, there is currently a huge amount of data being reported, for example, our Global Trade Repository, processes trades relating to over 100,000 entities, with over 40 million positions and we process a billion messages each month.  DTCC and others in the industry had identified these jurisdictional differences as early as 2012 and began raising awareness of the need to implement standards globally.

It is encouraging that efforts are in play now to create and adopt standards. For example, the International Swaps & Derivatives Association (ISDA) continues to develop its Common Domain Model (CDM) of data and process standards for OTC derivatives, while the Financial Stability Board (FSB) is collaborating with the Committee on Payments and Market Infrastructures and board of the International Organisation of Securities Commissions (CPMI-IOSCO) to formulate governance and technical guidance to underpin common data standards for derivatives reporting. There is a real need for the industry to work together with the regulatory community to accelerate the adoption of standards so that data can be aggregated and shared more freely.

Furthermore, the sharing of data held by trade repositories has not happened to the extent originally intended not only due to inconsistencies in the data collected but also because of restrictions around legal and structural access. However, regulators are increasingly looking at ways to share data more efficiently and cost effectively, spurred by efforts from the FSB. For example, the US Congress repealed statutory indemnification requirements in December 2015 that had previously limited data exchange with trade repositories from third-party jurisdictions. The CFTC subsequently proposed to establish procedures governing access to data collected by US swap data repositories. In May 2017, the European Commission proposed an amendment to the European Market Infrastructure Regulation (EMIR) to provide direct access to data held in European TRs for third-party facilities in jurisdictions with which equivalence has been agreed.

HM: What do you think regulators could do to simplify the process?

CC: While there may be a need for some jurisdictions to require additional fields for the purposes of national market surveillance, regulators must agree on a global standard set of data which defines the fundamental economics of the trade, including who is trading, what is being traded, the size of  the trade, the time of the trade, its price, and so on. They need to also agree on validation standards to be applied so that wherever the trade is reported, it is done so in a standard format and those certain data elements can be easily shared and combined.

If regulators could agree these data standards and a timeframe for rolling them out globally, this would be hugely beneficial to the industry.  We know that the CFTC is in the process of incorporating guidance from CPMI-IOSCO in its rewrite of the rules, and we are hopeful that other jurisdictions will align with evolving global consensus. This increase in standardisation, in turn, will open new possibilities for users of trade repository data to extract increasingly greater value from this information.

HM: Tell me about the role DTCC’s Trade Information Warehouse (TIW) played at the time of the financial crisis in 2008.

CC: At the height of the Lehman crisis there was a lot of uncertainty in the industry around market participants’ exposures in the credit defaults swaps (CDS) market. It was the transparency demonstrated by the credit derivatives TIW, operated by DTCC, which played a key role in alleviating market concerns at the time of the Lehman bankruptcy and provided the impetus to the G20’s introduction of trade reporting requirements. The G20, however, recognised that replicating that same transparency across the vast OTC derivatives market would not be achieved on a voluntary basis, as was the case in the credit derivatives market, where reporting was a by-product of credit event and settlement automated processing delivered by the TIW.

At the time of the crisis, there was speculation that CDS exposures could have been as high as $400 billion, but the TIW was able to demonstrate that net exposure was significantly lower than that, at $6 billion, producing a calming impact on the market and allowing regulators to understand what the total exposure in fact was. This type of standardised information across the credit derivatives market is what the industry is trying to replicate through mandatory trade reporting to registered trade repositories.

HM: What’s the latest on the re-platforming of TIW to a DLT system?

CC: In just over two years since the inception of this project, we’ve successfully completed development of the platform and are now in the process of conducting user acceptance testing with the market, with plans to go live later this year. Until now, a large number of distributed ledger projects have only been proof of concepts, but this is one of the first projects to enter into production and is truly a ground-breaking effort pushing the boundaries of technology use in the industry.

Where this goes in the future, and the role it could have in processing and trade reporting, is largely dependent on a number of factors. Firstly, there needs to be appetite and interest from the industry to invest and change to put more asset classes and functions onto distributed ledgers. Secondly, regulators need to have the ability to access the data and gain full transparency into the market. However, data standards must be in place for reporting requirements, data quality, formats, codes and fields. Concerns have already been raised across the industry that the proliferation of DLT-based initiatives utilising multiple protocols, programming languages, data fields and dictionaries could result in fragmentation, inefficiency and cost. One of the reasons why we were able to start this project is that the TIW had already defined standardised process flows and data models. This helped to make credit derivatives an ideal test case and provide an opportunity to test the technology with appropriate and meaningful scale. Bolstered by common data standards and governance, a DLT-based TIW can enable the industry to process and report to regulators from the same data record.

From there, the industry could leverage the data collected to deliver new value-added services, further reduce costs and mitigate both operational and systemic risks.

HM: What are your predictions in terms of regulatory change as it relates to derivatives reporting?

CC: I am hopeful that regulators across the world will continue to work with the industry and look at ways to harmonise their data reporting regulations. If you look five years out, I hope that regulatory change will have been transformational and that regulators will have been able to agree on standards and subsequently the broad adoption of a common global framework for derivatives trade reporting.

We must ensure we are able to move forward from where we are at the moment, so that greater value can be gained from the data and the infrastructure that has been built to support derivatives trade reporting.  This is what regulators and industry participants need to focus on in the years ahead. If jurisdictions choose to mandate reporting according to different standards compliance costs will simply increase and the ability to aggregate data, and hence monitor and mitigate systemic risk will be severely hampered.