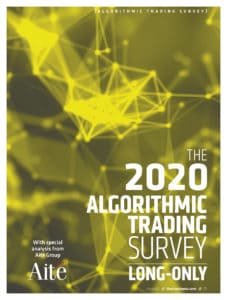 On the whole, 2019 was a very good year for global equity markets. Passive investing and indexing continued to tick along while the major US indices recorded new highs—the year ended with three rate cuts in the US helping to fuel the largest gains since 2013. Likewise, European markets had their best year in a decade. Many of the fears worrying investors never realised—the global recession never arrived, trade wars didn’t deter investment, Brexit didn’t implode the market, and World War III wasn’t on the horizon after all. Taken together, a robust market, stringent best execution requirements, and improved decision support created a favorable environment for algorithms.

The average score of long-only survey respondents is 5.71 in 2020—a slight decrease from the 2019’s score of 5.74 (up from 5.60 in 2018). In 2020, the most impactful features of algorithms are customer support and services, ease of use, dark pool access, execution consistency, and increased trader productivity (Figure 1). Support services, which draw the highest score of 5.96, also attracted relatively high marks in 2019’s survey (5.95). Being able to get ahold of a broker supporting the algo suite is a top priority for the buy-side. Ease of use, a category that has been improving over the past three years, garners the second-highest mark of 5.92 (versus 5.89 in 2019) as technology becomes more user-friendly and streamlined, such as the automation of trades engaging algos that originated in order/execution management systems.

Dark pool access continues to be an important area for market participants’ algo use. The largest jump in score is linked to this capability (5.90 in 2020 versus 5.74 a year ago). Brokers continue to offer a greater range of connectivity and provide access to liquidity as the number of dark pools and amount of dark liquidity continue to increase. Algos are being used more effectively to manage greater amounts of fragmented liquidity, and market participants are increasingly satisfied with the results. Execution consistency marks the second-highest jump in year-over-year scoring (5.81 in 2020 versus 5.75 in 2019), likely a consequence of calmer seas (e.g., the Cboe VIX averaged 15.39 vols in 2019 compared to 16.64 in 2018) coupled with improved decision support. Lastly, increased trader productivity receives a score of 5.80, down from 5.88 in 2019. While there is no doubt algos improve front-office productivity, at a point, diminishing returns to production are likely.

Respondents’ reasons for using algos, presented in Figure 2 as a percentage of responses, differ between 2020 and 2019. Overall, increases are seen in six areas of algo trading this year versus last: ease of use, increased trader productivity, greater anonymity, smart order routing, routing logic, and pre-trade estimates. Meanwhile, decreases are observed in seven categories over the same period: consistency of execution performance, the reduction of market impact, algo monitoring, lower commission rates, better prices, higher speed, and customisation. Thus, net/net, there is a greater focus on working orders quickly, easily, and in a sophisticated manner that protects information leakage. There is less emphasis being placed on (implicitly/explicitly) cheaper algos, those that are faster than others, or those that can be highly customised to provide a consistent and superior outcome.

“One and done” may be a relic of the past

Across the board, it is evident that long-only funds of varying assets under management (AUM) are mostly looking to at least two algo providers (Figure 3). From a diversification and business-continuity perspective, managers are likely unwilling to place all of their eggs in one basket and risk a provider outage. The smallest firms, including those managing up to US$1 billion, appear to be comfortable with using roughly two providers. Larger firms, such as those with an AUM range of US$1 billion to US$10 billion, likely rely on three. The largest firms with AUM over US$10 billion work with about four algo providers.

Digging into the details a bit, long-only managers with US$0.25 billion to US$0.5 billion in AUM show a year-over-year decrease in the number of algo providers, falling to 1.83 in 2020 from 2.20 in 2019, on average. No doubt, cost pressures have kept them from opening up the purse strings to engage with additional providers. Likewise, larger managers with over US$50 billion in AUM have also scaled back and consolidated their relationships to an average of 4.02 providers this year from 4.45 in 2019. While having four providers still appears to be a well-diversified strategy, adding more (e.g., equity algo providers) may have diminishing returns in light of limited commission budgets to pay for research and other services.

Larger managers are generally more likely to be motivated to use several algo providers, given the resources they are able to put to work as well as the requirements necessary for managing a multi-asset class portfolio. Looking beyond equity algorithms, the rise of algo use in the foreign exchange (FX) asset class has grown over the years for spot trading and, recently, has begun to extend to FX derivatives such as non-deliverable forwards. New regulations, such as the uncleared margin rules, are driving FX derivatives into the clearinghouse and fostering more electronic trading. The development of new algos is a natural extension of this phenomenon. Thus, it may be that these managers are holding the number of algo providers somewhat consistent while diversifying the types of algos used by asset class and strategy.

Stripping away the AUM filter on the number of providers selected by long-only managers yields some interesting results (Figure 4). This year’s survey suggests long-only managers are either all in when it comes to committing resources to algos or sticking with two or so providers. The population of participants indicating they are “one and done” has shrunk year-over-year and is now only 19.86% of managers versus 28.2% in 2019. This trend is likely driven by managers looking to mitigate counterparty risk. Deutsche Bank’s July 2019 announcement that it would exit global equities trading, cutting 18,000 jobs and transferring 75 billion euros in risk-weighted assets as part of a major overhaul, drives this point.

The group of firms relying on five or more algo providers has grown substantially in the past 12 months. In 2019, 29.23% of participants fell into this group. This year, a whopping 41.13% of surveyed firms have a large group of providers they work with. The reason for this is two-fold. On one hand, a combination of business relationships and specialised tech (offering better features and functionality that foster ease of use, consistent execution, and enhanced trader productivity—all buttressed by better customer support) may be the likely driver. Alternatively, fund managers may need to pay a wider number of providers for research and other broker-provided services, which pushes them to take on additional algo providers.

Just because you can do it doesn’t mean you should

The distribution of algo usage by value traded has changed since 2019 (Figure 5). For example, the group of managers trading roughly 50% to 60% of their portfolio using algos has increased to 22.16% of participants from 9.85% 12 months ago. This group represents the largest percentage of survey participants, edging close to one-quarter of managers. Additionally, the year-over-year increase is the largest of any bracket. Similarly, long-only funds allocating 40% to 50% of their portfolio value into algos grew to 12.75% from 7.06% a year ago—the second-largest increase of any bracket. At the lower end of the spectrum, 8.43% of participants trade 5% to 10% of their portfolio’s value using an algorithm (versus 4.76% 12 months ago). Increases are also apparent in the 20% to 30% bracket, where 7.65% of long-only funds increased the value of their portfolios traded by algos from 5.25% over the same period.

There is a perception that more firms are pushing a larger percentage of their book into algorithms, and this will likely continue, even beyond equities. However, firms prefer to balance the amount of trading that is algorithmically dealt against other means of transacting. The percentages of funds have fallen in all of the three largest categories: 60% to 70%, 70% to 80%, and over 80%. In some cases, managers may have discovered through trial and error that algos are not right for every instrument that can be algorithmically traded. In these instances, cost factors such as execution consistency and market impact may have fallen short of expectations.

Long-only managers were asked to select the types of algorithms they used from providers (Figure 6). In 2020, the highest concentration of surveyed long-only funds turned to dark liquidity-seeking algos (72.94%)—a trend that has been increasing in recent years and highlights an evolution in trading performance. Algos that have been in existence for years, including volume weighted average price (VWAP), time weighted average price (TWAP), and implementation shortfall (IS), may be gamed and thus might not offer much benefit in terms of improving trading performance. However, navigating all of the execution venues and using dark liquidity-seeking tools, along with customised smart order routing, may offer significant advantages and outperform alternative options.

Over half of surveyed participants indicate they use VWAP algos (54.71%), a figure that has mildly declined over the past few years. Nearly as many managers also employ implementation shortfall for single stock algos (53.14%)—a percentage that has ticked higher as of late and is likely the result of providers emphasising greater variation in their offerings. Lastly, although the percentage-of-participation algos are used by nearly half of the respondents (49.02%), there has been a decline in usage year-over-year as preferences shift.

The TRADE’s Algorithmic Trading Survey 2020, can be read in full with provider profiles here.
This year’s survey analysis for the long-only results were carried out by Aite Group, led by Audrey Blater, senior research analyst.