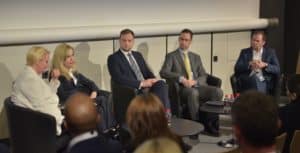 Buy-side firms may be sitting on valuable amounts of alternative data from everyday client interactions, though investment is needed to turn it into an informational edge, according to experts.

Alternative data, often categorised as big data or information obtained outside of traditional sources, is being utilised by hedge funds and asset managers globally for investment decisions.

With the form of data being a relatively newer concept and largely unstructured, issues such as a lack of standardisation, regulation and analytical abilities are holding back widespread adoption and utilisation.

Speaking at TradeTech Europe, panelists highlighted how the buy-side holds proprietary data which can be  ‘gold’ to them.

“Sometimes unstructured or alternative data means not easily accessible,” said Anthony Tassone, founder and CEO of GreenKey Technologies. “Sometimes people think acquiring this data set can be challenging, but you may have some of this data in house but you’re just not enhancing it.”

“Most of you have tonnes of data you are not accessing or leveraging, so some of the greatest enhancements are allowing you to gain insights from that data. Everyday interactions with customers.”

Information sources such as social media, blogs and the dark web have become alternative data sources for market participants to apply to their investment strategies, however one provider argued that ‘hard work’ and ‘investment’ is needed for the information to be used to create alpha.

“People are trying to present alternative as magic bullet where you can buy it off the shelf,” said Olga Kokareva, head, data sourcing and strategy at Quantstellation. “Even though it sells and sounds like a good marketing pitch, it doesn’t work like that.

“The truth is hard work and investment need to be put into this process. For firms who can manage to do that and put teams and people in place, alternative data works.

Kokareva added that in the future, she believes every portfolio manager will need to have exposure to predictive analytics and big data to survive in the industry.

Alternative data providers use automation and artificial intelligence to analyse trends, and through such services as Twitter, can identify relevant developments as they’re unfolding in real time.

In March this year, Thinknum, an alternative data specialist based in New York raised more than $11 million in a funding round, in order to expand the use of its platform across the institutional investment community. The company’s alternative data platform has been used by major financial institutions for equity research and analysis, including Barclays, Goldman Sachs, Cowen and Bank of America Merrill Lynch.

The panel added that barriers to widespread utilisation of alternative data linger through a lack of global standardisation and regulation. Speakers also emphasised the importance of workflow integration.