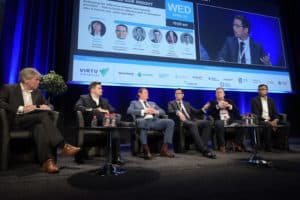 The emergence of ELP systematic internalisers (SIs) as a result of MiFID II has caused a significant shift in market structure for the better in terms of access to liquidity, according to panellists at this year’s TradeTech Europe conference.

While there are still concerns around the transparency of how SIs operate and how these mechanisms differ from each other, panel members said that progress was being made to address these issues.

“All of the ELP SIs are genuinely different; some focus on market impact or size, some focus on specific parts of the stock universe. It’s really down to the broker to understand each SI’s characteristics and use the right liquidity provider and match them with the right end user, to really curate that liquidity pool,” said Jigar Patel, global head of business development at XTX Markets.

Patel observed that some brokers are further along this journey than others, while Citadel Securities’ director of European development, Jonathan Finney, said that brokers had become a key part of this infrastructure.

ELP SIs seem to be winning over market participants after reaching record market share in February, according to an analysis by TABB Group. Total daily notional among the six electronic liquidity provider (ELP) SIs that regularly report volumes to TABB Group reached €1.45 billion in February this year, the highest level to date, compared to €1.12 billion in January.

From the buy-side perspective, Liontrust Asset Management’s head of trading, Matt McLoughlin, said that ELP SIs are providing new options for liquidity and that most firms are now interacting with these entities, even if they have not connected bilaterally.

“If you connect bilaterally, as we do at Liontrust, you can benefit from larger size, better price while price improvement is still available before the regulators make their change, and also lower market impact, which is something that we value quite a lot,” he said.

Although he acknowledged that ELP SIs were not the answer for every type of order, McLoughlin highlighted the importance of “leveraging the transparency we are in”, a point that was taken up by the other panel members.

Simon Dove, head of liquidity management at Tower Research Capital Europe, explained how the firm had built its offering through a collaborative approach:“We give transparency around the kind of experience you are going to see on the SI and there is over a year’s worth of data driving that decision, which for me, is quite a proud moment.”

Dove went on to say that criticism of the SI regime had allowed market makers to provide a greater level of transparency around how the mechanisms operated, the liquidity and technology involved.