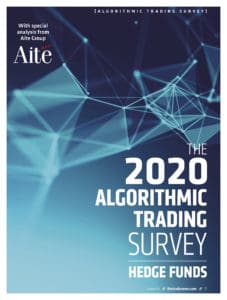 It is no secret that global equity markets had a good year in 2019. Global employment held up, the continual threat of trade (or actual) wars between major powers never quite materialised and the general election in the UK ended much of the political uncertainty that had been holding back investment. In the US, having led markets to believe that rates would be rising the Fed walked back its projections before then cutting rates three times before the end of the year, helping to fuel major gains in US stock markets. These robust market conditions, the drive for efficiency and the rapid digital transformation of the financial industry have all contributed to a favourable environment for algorithmic trading.

While the results of this year’s algorithmic trading survey were collected before the COVID-19 pandemic struck the global economy, it is still worth reflecting on the survey’s results in light of the disruption caused by the pandemic. Most notably, the top reason given in this year’s survey for using algorithms is to reduce market impact. Given the increase in market volatility and trading volumes since March 2020, it is striking that the pandemic has led to a greater realisation of algorithmic trading in the industry.

While progress has not been consistent across all areas of this year’s survey with scores ranging from a minimum of 4.84 to a maximum of 6.64, the overall survey average across all algo providers of 5.77 was up slightly from the 2019 survey average of 5.72. This indicates that the industry has made positive steps toward beginning to refocus on the quality of execution and achieving better outcomes for the end investor, even though room for improvement remains. Initial concerns brought by The Markets in Financial Instruments Directive (MiFID II) have evolved from managing the compliance requirements particularly around best execution to fine-tuning algorithmic trading strategies as a major component of e-trading usage.

Figure 1 shows year-on-year increases in the scores for all but four of the 15 categories under evaluation. In the two categories introduced in 2019, algo monitoring capabilities and order routing analysis, scores marginally declined by 0.13 and 0.02 respectively. The highest score recorded in this year’s hedge fund algo survey was the ease of use category (6.02), followed closely by customer support (6.01) and dark pool access (5.91).

These scores provide an insight into the qualities valued by the industry today such as usability and the confidence that the sell-side can provide relevant and high quality liquidity. This liquidity includes access to dark pools, alternative trading systems and systematic internalisers in Europe and the US. Meanwhile the lowest scores were recorded in the execution consulting and algo monitoring capabilities categories with both scoring 5.50, reflecting concerns from hedge funds about how well the sell-side is able to provide feedback on the performance of algos.

While the algorithm performance as rated by survey participants increased by an average of 0.05 between 2019 and 2020, this average increase was much more marginal compared to previous years. The highest recorded increases in performance were found in the ease of use (+0.21), speed (+0.14) and customisation (+0.13) categories, indicating that the industry is becoming more comfortable and proficient in its use of algorithms. However, performance ratings between 2019 and 2020 declined in a number of categories, including algo monitoring capabilities (down 0.13), execution consulting (down 0.07) and trader productivity (down 0.06). While algo providers have done well in providing usable and efficient solutions, there is still progress to be made when it comes to other algo characteristics.

Survey participants indicated reasons for using algorithms are primarily associated with the reduction of market impact and the ease of use, followed by the consistency of execution performance.  Figure 2 shows little difference between 2019 and 2020 when it comes to the reasons for using algorithms. It is striking that the top four reasons given, all received such similar scores: reduce market impact (10.63%), consistency of execution performance (10.07%), ease of use (10.07%) and increase in trader productivity (9.95%). This indicates that hedge funds would be especially receptive to solutions that address these goals collectively. The fact that ease of use continues to place among the top reasons for using algos year after year underlines the value that buy-side firms place on simplicity and reliability.

The survey data also shows that price improvement is increasingly a motivating factor for hedge funds deciding to use algos, rising from 7.62% in 2019 to 7.96% in 2020. Initially, algos were primarily used for keeping up with the speed of modern financial markets. Increasingly, however, the buy-side is more focused on performance and price efficiency when it comes to their algo usage. This is especially true as usage has become more harmonious across the industry.

2019 saw the inclusion of two new survey categories: data on venue/order routing logic or analysis and algo monitoring capabilities, both of which declined slightly this year.

Hedge funds are partnering up more and more

The number of providers that hedge funds are selecting has become one of the most revealing trends produced by the 2020 survey. Historically there has been a clear preference from hedge funds to use multiple algo providers. Surveys from previous years have demonstrated that funds both big and small in terms of AuM have often reported using an average of more than four different algo providers. Yet figure 3 indicates that this appetite for multiple providers has begun to trail off in the last two years as only the hedge funds managing between US$0.5 and US$10 billion have reported an increase in their average number of providers since 2019. Hedge funds managing over US$10 billion and those managing less than US$500 million reported a decline in the average number of providers used.

It is curious that firms managing between US$500 million and US$1 billion reported an average of 1.8 providers in 2019 before substantially increasing to 4.0 providers in 2020. The 2020 data shows that larger and mid-sized hedge funds have cut back on the number of algo providers they engage with, though this trend of declining average provider numbers has been more marginal between 2019 and 2020. Perhaps the stickiness of the 2020 numbers compared to 2019 shows that the fall in the number of providers used by the hedge fund industry is beginning to level out even if these figures are expected to fall further as the industry moves beyond compliance-focused-objectives.

While the consolidation of algo providers in the hedge fund industry previously looked as though it was here to stay, figure 4 shows a decline in the proportion of funds reporting using 1-2 providers from 46% in 2019 to 24% in 2020. This would indicate that industry consolidation is not as settled as previously thought. Additionally, the percentage of funds using 5 or more providers jumped up from 33% in 2019 to over 46% in 2020 which takes us back into 2018 territory where half of all respondents used 5 or more providers.  As firms incur more costs for research and other services, their broker lists become longer. Hedge funds like to work mainly with their prime brokers and will typically only use algos and commission dollars to pay for other services where necessary. The move away from prime brokers can also indicate concerns that those firms are not the best in class at providing e-trading services.

Hedge funds are finding their groove when it comes to algos

Hedge funds turn to the dark side

In terms of the type of algos that hedge funds have been adopting for their trading strategies, figure 6 shows the year-on-year increase in the use of dark liquidity seeking and implementation shortfall (single stock) algos. Dark liquidity algo usage has increased by 7% since 2019 and implementation shortfall (single stock) usage has increased by almost 6% compared to 2019’s results. The only algos to have recorded a fall in usage since 2019 are % volume and volume-weighted average price (VWAP), dropping by 10.58% and 0.86% respectively. The algo that recorded the largest increase in adoption was time-weighted average price (TWAP), rising by nearly 13% from its 2019 score.

The TRADE’s Algorithmic Trading Survey 2020, can be read in full with provider profiles here.
This year’s survey analysis for the hedge fund results were carried out by Aite Group.