The TRADE > Thought Leadership > Running with the level: Volatility, VWAP and the pitfalls of strategy selection

When it comes to improving trading performance, selecting the right strategy is crucial. An ITG survey of buyside traders last year found that 85% believe strategy selection has the most potential to impact trading performance, far outstripping the importance of broker choice or venue selection. But before traders choose a strategy, they would be well served to consider prevailing market conditions. The relationship between algorithmic trading strategies, trading costs and volatility has been well documented, including in a 2011 paper by Ian Domowitz. Domowitz found that usage of a VWAP strategy in a high-volatility environment added an eyebrow-raising 18 basis points of impact costs versus a VWAP trade executed in a low-volatility environment.

Despite this observed shift in volatility, we see the general use of a VWAP strategy remained quite consistent between the two-time periods. During the more volatile period, liquidity-seeking algos were used less while Implementation Shortfall (IS) usage nearly doubled. 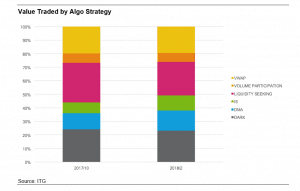 VWAP as an algo strategy is generally used to achieve two different objectives: 1) to implement a trading strategy which minimizes costs against a VWAP benchmark, and 2) to take an in-line approach to implementation against an arrival benchmark.  Irrespective of the driver behind the selection of a VWAP algo, during the more volatile period, costs increased by 2x against the VWAP benchmark and nearly 3x against the IS benchmark.  Recognizing that VWAP as a strategy can be affected by single outlier trades, we also reviewed the median IS costs, which increased from -1.3bps to -4bps.

The Road Not Taken

Algo performance evaluation should not just consider the cost of what was executed, but should also consider the opportunity cost for what does not get completed.  Without considering the number of shares left on the table, we would say that in the lower-volatility environment of October, VWAP was still the most expensive strategy. But when taking into account the total cost of the order, including the unfilled shares, we can see that IS was the most expensive strategy, averaging 18bps of slippage . This picture changes in the higher-volatility regime of February, though. Here, the total costs for all strategies, with the exception of IS, increase between October and February, while VWAP spikes to -28bps of total implementation cost. 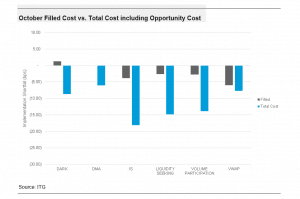 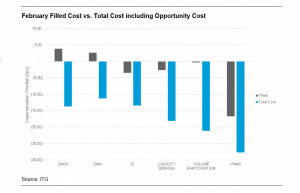 It is difficult to offer a definitive reason for the continued use of underperforming VWAP strategies during periods of higher volatility. It is possible that some traders are focused on working more difficult parts of their order books and they seek to put some trades on a “participate without too much risk” setting through VWAP. It is also possible that traders looking to remain in line with their index benchmarks are hopeful that VWAP is the best way to preserve that correlation when trading conditions are unfavorable. Even if this year doesn’t see the same return of volatility that some are predicting, traders would be well served to consider lightening up on usage of VWAP strategies during any sharp spikes in volatility, because an “in-line” print can result in sub-par trading performance.