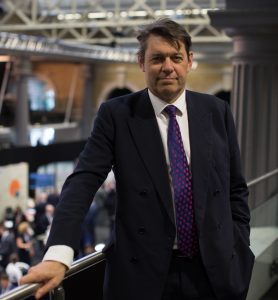 What have been the major changes under MiFID II so far?

Mark Pumfrey: Not an awful lot has changed as things stand today, in that there hasn’t been any significant shift of liquidity back into the lit markets, which may well cause further regulatory scrutiny. Although, to be fair, the dark volume caps (DVC) will cause further changes that aren’t 100% clear at this stage.

The things that have changed have been the continued evolution of large-in-scale (LIS) trading as a percentage of the dark MTF world, which has been a rising trend for some time and up to the point the DVCs were implemented LIS was at just under one-third of dark MTF trading, up from around 5% about 18 months ago. There’s been a significant shift to take advantage of the LIS exemption, which will continue now that we have DVCs in place with LIS currently above 40% of Dark MTF trading.

There’s also a shift of liquidity towards the periodic auctions; relatively small pre-DVCs, I think the number was around €40 million a day prior to the beginning of the year increasing to something like €350-400 million per day, so running into the DVCs we saw quite a big pickup on 12 March. Post the DVC implementation, we have seen this trend continuing to above €600 million, so it looks like a decent number of the below-LIS business in capped stocks is going to head towards these venues as  a way of doing that business.

What trends do you expect to see either continuing or emerging going forward under MiFID II?

MP: I think we’ll see a continuation of the growth of LIS trading. We certainly know that institutions are keen to find large liquidity in the dark and have that size discovery process protected. LIS is the obvious way to do that. The constraining factor is LIS match rates, and from our perspective we’ve seen a significant continued increase in average daily liquidity on Liquidnet’s platform, which is up approximately 20% this year to around $28 billion of liquidity every day in European instrument types.

That in itself has significantly increased our match rates which is the key; our match rates this year are in the 20-25% range, whereas two years ago they were around 16%. So, we are seeing more liquidity, and more diverse contra breadth in our pool. That’s been an important factor to growing our LIS business and I guess across the market, because the market is more disposed to trade like that as opposed to where it was 18 months’ ago.

Periodic auctions will also continue to see growth and we’ve seen the start of that as there are a number of new venues in the market, which are certainly seen as important places for major players and the below-LIS business to find opportunities to do business.

Then of course there is the whole systematic internaliser (SI) regime. There is some good quality liquidity in the SI regime that we access and we will continue to analyse the different venues. As things stand you’ve got to do quite a lot of work in cleaning up condition codes to see exactly what is genuine daily liquidity going through the SI regime. What we’ve noticed is that the sizing of the SI regime is quite similar to the BCN regime at this stage: the median execution size is about €4,500. There’s a lot of work still to be done as to how the regime evolves and what the regulatory view of it will be going forward. It does also seem that in the very early days post DVC implementation SI activity is experiencing a significant lift.

Is it still too early to predict how the SI regime play out?

MP: Those involved in the SI regime are obviously aware of the regulator’s stance and the scrutiny SI operators will be under to ensure that they differ in important ways from the previous BCN regime. There is going to be a lot of scrutiny and there will be an increasing desire for more transparency than the system has produced so far, but the SI regime is and will be an important source of liquidity for the market. 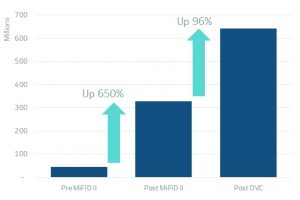 Growth of periodic auctions // Source: Bloomberg, September 2017 up to and including 13th March 2017

Is the growth of the periodic auction in line with your expectations going into 2018?

MP: Absolutely. Periodic auctions are seen as a place for the beneath-LIS and dark activity to occur, because they do have that dark characteristic to them. The investment in periodic auctions from some of the major operators has been very clear that this is a strong way forward for them. I would certainly expect the acceleration we saw on 12 March to continue, because there is a significant amount below LIS trading that needs to find a home.

Periodic auctions fulfil a need in the market to enable trading in smaller sizes effectively in the dark. I think one of the questions the regulators will ask is about the addressability of liquidity in the auctions themselves; are they pre-matched trades that are just getting printed on a lit market? It’s hard for us to have a view how wide and accessible that liquidity actually is but I’m sure the regulators will be looking at this.

How do you expect the regulatory landscape to evolve going forward?

MP: It’s incredibly fluid and highly complex. From a MiFID II perspective the regulators will allow things to settle somewhat; we’ve had major changes in January and then again in March with the DVCs. We all know there have been problems with data, which is why DVCs were delayed, but you must take the data and really analyse what’s going on properly to understand it, because with so many inter-related matters, you can jump to the wrong conclusions if you move too quickly. I would expect the regulators to let these market structure changes bed-in, certainly through the first half of the year, before deciding on the actual impact of MiFID II on European markets.

It does seem to me that European regulation is taking a global lead in terms of driving best practices and we are certainly seeing shifts in US asset management adopting MiFID II, because that is where they are being driven by their end-customers and clients.

There are also some other interesting nuances, not least around Brexit. When it comes to trading in the dark, I think it’s fair to say that the FCA is more comfortable with dark trading and understands the institutional benefits of it in perhaps a different way than European regulators. Once the UK has left the EU there may well be further a change.

It’s interesting that most of the stocks that are capped are UK stocks, whereas the cap on stocks on the Continent is much smaller. There are many unknowable unknowns: things will certainly continue to evolve, but I don’t think anyone right now can truly predict the direction in which things will go. With the rise in LIS and the overall reduction in dark MTF trading outside LIS the DVC may be seen as redundant as the caps will not be breached once market structure has settled down.