The TRADE > News > Buy-Side > With the basics covered, it’s all about innovation in the EMS space 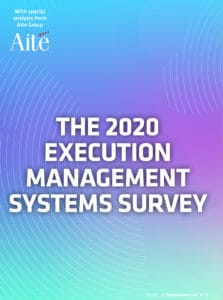 The 2019 edition of The TRADE’s Execution Management Systems (EMS) survey highlighted the definite shift in industry focus, away from concerns over compliance and towards execution quality. The results from this year’s survey compounds the sense that both EMS vendors and users are now mostly focused on improving the quality of execution.

For the most part, scores have continued to rise, however there are certainly areas of service where vendors can do better and are in danger of falling behind. Figure 1 shows scores recorded over the past two years, across 13 functional EMS categories under review by buy-side respondents.

Overall, scores were broadly up from 2019, with all categories under scrutiny scoring above the default ‘Good’ score of 5.00. There were only two categories in which the 2020 average fell below its 2019 level: FIX capabilities (down 0.06) and product development (down 0.03). For all other categories how-ever, average scores were up from 2019, albeit marginal. One exception is in the ease-of-use category, which increased by 0.18 from last year, indicating an increase in the usability of EMS providers across the board this year.

As in 2019, two categories record-ed an average score of more than 6.00 (Very Good), representing particularly high performance. The overall survey average score rose in this year’s edition to 5.82, up 0.04 from last year’s survey average of 5.78. This year’s survey average marks the highest overall aver-age in the survey’s history, dating back to 2013. While it would be disingenuous to write up the 2020 results as some kind of spectacular game-changer, they do underline the sense that improvements are being made gradually, rather than suddenly in the EMS space.

The results from this year’s survey show that traders are recognising the work done by vendors to get the ‘basics’ right, hence the high scores for ‘reliability and availability’ and ‘latency’. The high scores associated with both the breadth of broker algorithms and breadth of direct connections to venues categories show the success that EMS providers are having at ensuring their products can integrate with the wider trading landscape. At the same time, product development counts as the lowest scoring category, indicating that vendors seem to be having more trouble innovating new solutions than improving their existing product.

The area of product development has consistently ranked as the lowest scoring category since 2015, and 2020 is no exception. Despite having made year-on-year improvements from 2017 – 2019, in this year’s edition the score for product development fell marginally by 0.03 to a score of 5.36. While above the ‘Good’ threshold of 5.0, this is still significantly below the survey average of 5.82. The buy-side expects more from their EMS providers when it comes to product development and those providers that are able to offer innovation, will likely find themselves with a competitive advantage.

The highest scoring categories in this year’s survey, as in 2019, were reliability and availability and FIX capabilities, recording a score of 6.27 and 6.06 respectively. Other high scoring categories in this year’s survey include latency (5.97), breadth of broker algorithms (5.96) and breadth of direct connections to venues (5.89).

Respondents were asked to select their four most important features of EMS functionality and the results are shown in figure 2. In terms of what the buy-side look for most in EMS, ease-of-use (68.1%) and post-implementation client service (45.5%) rank as the most important among respondents in this year’s survey. Whereas connectivity with internal systems (41.2%) and number of connections to different brokers (37.6%) rank third and fourth. In this respect, preferences among survey respondents has remained particularly consistent over the past 12 months.

One area that recorded a significant yearly increase in importance among survey respondents was low latency, rising by 6.7% from 2019 to 2020. Although it experienced a small decline of 2% from 2019, the ease-of-use category continues to preside over all other categories as the most important feature, as it has over the past three years. The rise in importance attributed to low latency and the continued dominance of ease-of-use as an important feature of EMS, underline the critical importance of efficient usability to a successful EMS offering.

The consolidation of EMS providers among the buy-side is one trend that shows little sign of abating, as shown in figure 3. Over 67% of buy-side respondents reported to using a single EMS provider in this year’s survey. This is beginning to build up to a pattern where a growing proportion of buy-side respondents use a single EMS provider. In 2017 this was proportion was just 34% and it has since grown year-on-year to reach 67.3% in 2020, almost double the 2017 figure. Admittedly part of this dramatic increase from 2017 can be explained by the introduction of MiFID II in January 2018, prompting asset managers to try out a variety of options before settling with a single EMS provider. This tendency to use fewer EMS providers is also partly explained by the increasingly broad offering of vendors who have expanded their asset class coverage to non-equity classes such as foreign exchange (FX) and fixed income securities.

When it comes to evaluating EMS providers, ten firms received sufficient responses from buy-side users to garner a profile in this year’s survey results. As with previous years, Charles River recorded the lowest score of all profiled providers with 5.05 – down from 5.08 in 2019 – while also recording the lowest scores in nine of the 13 areas under evaluation. Meanwhile Virtu Triton received the highest average score with 6.20. Interestingly, both companies have been recently involved in M&A activity, demonstrating the appetite for consolidation in the historically fragmented trading industry. Charles River was bought by State Street in October 2018 and Virtu bought rival agency brokerage ITG in March 2019. Yet disparity between their performances would indicate that Virtu has certainly been more successful at leveraging their recent expansion.

In terms of the asset classes traded through these systems (see figure 5) equities continue to dominate the landscape with just under 95% of survey respondents trading this class of instruments. Interestingly there were also noticeable increases in the proportion of other asset classes: listed derivatives rose to almost two thirds of respondents (64%), fixed income rose to a third of respondents (33.5%) and foreign exchange increased from 12.4% in 2019 to 42.4% of respondents in this year’s survey. This all goes hand-in-hand with research from Aite Group that has explored in detail the trend toward electronic and automated trading in non-equity asset classes.

Overall, this year’s survey broadly depicts a positive outlook as the industry sharpens its focus on execution quality, leaving behind some of the emphasis on compliance brought about by the introduction of MiFID II.

While many of the areas under evaluation have performed highly, the COVID-19 pandemic has been a powerful reminder that disruption and extreme uncertainty can never be ruled out. All asset classes have experienced movements in trading as a result of the economic turbulence this year, and the ability to reallocate funds between asset classes with ease is an important quality to mitigate risk and take strategic decisions. One industry insider described EMS as a ‘cockpit’ for traders during the COVID-19 crisis, providing technology to access analytics and liquidity. It is there-fore important that EMS providers stay aware of the changing trading landscape and the obvious need for their solutions to be both innovative and adaptable.

The TRADE’s Execution Management Systems Survey 2020, can be read in full with provider profiles here.
As with this year’s hedge fund and long-only Algorithmic Trading Survey, analysis for the EMS survey was carried out by Aite Group.