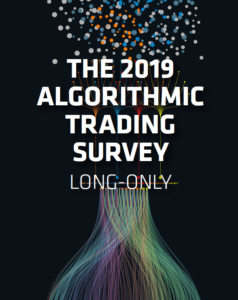 As end users become more comfortable and knowledgeable about the algorithms they are using, and in some cases placing them at the centre of their trading strategies, brokers and banks must stay ahead of the pace of change and provide consistent results to their clients. The results of The TRADE’s 2019 Algorithmic Trading Survey for long-only buy-side firms

The performance scores for algo providers in this year’s survey shows that brokers and other algo providers have begun stepping up their game, both in response to new obligations under MiFID II and the exact requirements laid out by their buy-side clients.

Overall, the average score from long-only respondents for the survey this year was 5.74 – a noticeable increase on the average score of 5.60 in last year and a return to the levels seen in 2017’s survey prior to the introduction of MiFID II.

This trend is evident across almost all of the fifteen functional categories under review, with all but one category showing year-on-year improvement, with many areas of performance again reaching, or exceeding, the 2017 results. This could be attributed to a less critical approach from buy-side algo users, however it is far more likely that algo providers have successfully adapted their offering and approach to the new trading landscape.

The highest score achieved in this year’s survey was in the customer support category with 5.95, while there were high scores in the improving trader productivity, speed, anonymity, and ease of use categories. The  areas of performance that showed the greatest improvement year-on-year were in improving trader performance (up 0.29 from 2018), speed (up 0.31 from 2018), cost (up 0.23 from 2018) and price improvement (up 0.21 from 2018). The two new performance categories introduced in this year’s survey showed respectable scores – 5.68 for data on venue/order routing logic or analysis and 5.58 for algo monitoring capabilities.

Long-only firms continue to adopt and utilise algos for the same reasons as they have done historically, despite the change in the regulatory landscape. The importance of execution performance consistency, improving the performance of traders and the ease of algo use were again some of the most popular reasons among respondents for the use of algos – the ease of use factor in particular continues to be more important for users, suggesting that the buy-side are looking for technology that simply works and allows them to concentrate on their daily workloads.

However, it is the consistency of execution performance that continues to be the overriding reason for buy-side firms to use algos as part of their trading operation, accounting for 11.25% of responses this year, perhaps unsurprising given the desire for reliability during a year of regulatory upheaval.

On average, long-only firms engage with between two and three algo providers, regardless of AuM, a marginal decrease on last year. Only those long-only respondents managing either $0.25-0.5 billion or more than $50 billion recorded consistent use of the number of algo providers as last year (2.20 and 4.45 respectively); clearly those on the buy-side with the largest pool of resources to work with are not in any hurry to reduce their options when it comes to algorithmic trading.

The evidence for algo provide consolidation is starker when it comes to the average number of algo providers used by long-only respondents regardless of AuM. There was a significant drop of just over 10% for firms choosing to use five or more providers in this year’s results, while there was a similar percentage increase of firms using just a single provider. The two extremes of the scale accounted for 57.43% of responses, indicating the buy-side firms are moving towards the polar opposites of the scale now that focus has shifted away from regulatory matters; buy-side firms are either looking for a wider range of options when it comes to algo trading or have refined their choices to a provider they know can deliver.

In terms of algo providers, brokers performed significantly better than their banking counterparts in the long-only survey, with only one bank earning an average score of over 5.50. Clearly the year after MiFID II implementation has been well spent by brokers that have taken the opportunity to step up their product offering to meet client requirements, while banking institutions have struggled to do the same, with some recording significantly worse scores than last year.

There is clearly much work for some algo providers then to catch their peers, while for others that have scored well this year the focus will be on bringing new innovations to the algo trading table that will push technology boundaries and improve results for end users. The question going forward is who will be among those providers pushing the envelope and who will be patching up the leaks as the industry continues to move further away from its recent regulatory concentration.

The 2019 Algorithmic Trading Survey for long-only firms can be read in full here.