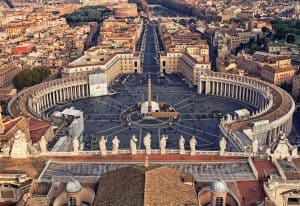 The US Commodities Futures Trading Commission (CFTC) has countered claims made by the Vatican in May this year that derivatives are unethical financial products.

Chairman of the CFTC, Christopher Giancarlo, and chief economist, Bruce Tuckman, responsed to the Vatican’s views in a letter addressing both derivatives broadly and the specific criticism of credit default swaps (CDS).

Pope Francis slammed derivatives products earlier this year, stating that they are ‘ticking time bombs’ ready to explode and poison the health of global financial markets. Targeting CDS in particular, the Vatican said they are  unethical due to the way they essentially allow gambling at the risk of bankruptcy.

Giancarlo and Tuckman outlined the social utility of derivatives and explained how they help to serve the needs of society by moderating price, supply and other commercial risks to free up capital for growth and job creation.

“[I]n many ways, the greatest beneficiaries of global derivatives activities may well be the world’s hungriest and most vulnerable,” the letter said.

“These are the people that Pope Francis has so powerfully advocated for by calling our attention to the ‘peripheries’ of the world. They would certainly suffer the most from the extreme price volatility in basic food and energy commodities that would result if derivatives trading were to suddenly cease.”

On CDS markets, the Giancarlo and Tuckman said that it is authorities like governments that benefit from CDS on sovereign securities which can contribute to lower costs of country debt, while increasing efficiency in regional bond markets.

However, the CFTC officials added that they do not claim the CDS market is free from both economic and ethical challenges. They also agreed in the scepticism of overly complex derivatives products, which traded in great volume in the run-up to the financial crisis between 2007 and 2009.

“We also agree that buyers of CDS protection, who stand to gain from defaults, must not be allowed to conspire to cause those same defaults or make them more likely. Such activity has recently drawn our regulatory scrutiny and censure,” the letter concluded.