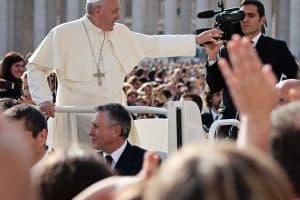 Pope Francis has criticised certain derivatives products claiming they are ticking time bombs ready to explode and poison the health of markets.

In a statement released by the Vatican, Pope Francis laid out his views on ethics with regards to some aspects of the financial system, focusing primarily on the derivatives market.

He explained derivatives products are, “less acceptable from the perspective of ethics respectful of the truth and the common good, because it transforms them into a ticking time bomb ready sooner or later to explode, poisoning the health of the markets”.

Pope Francis targeted credit default swaps (CDS) in particular, describing them as being unethical due to the way they allow gambling at the risk of bankruptcy of a third party.

“The spread of such a kind of contract without proper limits has encouraged the growth of a finance of chance, and of gambling on the failure of others, which is unacceptable from the ethical point of view,” he said.

Pope Francis noted an “ethical void” when such products are traded and negotiated over-the-counter (OTC) because this method is less regulated and takes “vital life-lines and investments to the real economy”.

He also expressed concerns around the Libor scandals which saw fraudulent manipulation and rigging at the hands of some of the world’s largest financial players. Pope Francis said that the fact this happened for many years reflects how “fragile and exposed to fraud” unregulated aspects of the financial system truly are.

“In this environment, the establishment of real “networks” of connivance, among those persons who were instead predisposed for the correct fixing of those rates, form, by coincidence, a criminal association, particularly harmful for the common good, which inflicts a dangerous wound to the health of the economic system,” he said. “It must be penalised with adequate punishments and be discouraged from repetition.”