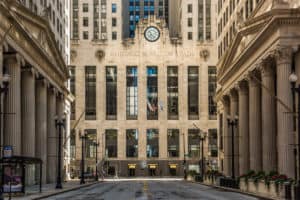 The clock reads six o’clock and the end of day whistle blows. In his final attempt to kill Sam the sheepdog after a long day at work trying to do so, Looney Tunes’ Ralph the wolf stands next to the clocking out system, pulls a stick of dynamite out of his pocket and lights it.

He stands back holding the dynamite at arm’s length ready to propel it at his arch rival as he clocks out for the day. However, Sam, tired from a full day of trying to kill Ralph, has other ideas. Briefcase in one hand, Sam walks over to Ralph, extinguishes the stick of dynamite between his forefinger and thumb and says, “It’s too close to quitting time Ralph, let’s pick it up there in the morning.” Ralph drops the extinguished dynamite, smiles and says, “Ok Sam, goodnight.” Sam replies “Goodnight Ralph, pleasant dreams”.

“That was the commodity pit, as soon as you checked out you were all friends again,” says Mike Cavanaugh, managing partner at Regiment Alpha, and former trader at the Chicago Board of Trade (CBOT). “You would be like – hey man, how’s it going you good? I’ll see you on the floor in 10 minutes! I’m going to go get some breakfast. You need some coffee?… Then you get in the pit and you’re saying ‘I’m gonna rip your throat out!'”

Up until the COVID-19 pandemic, the Chicago open outcry trading pits were packed with animated traders and brokers wearing brightly coloured jackets, a chaotic sea of people pushing and shoving. The open outcry system offered a face-to-face auction system, matching buyers and sellers in deals through verbal communication and hand signals. It was established so traders were able to see one another during the period before technology facilitated the rapid rise in electronic trading.

However, when the first peak of the pandemic hit in March last year and all market participants were forced to transition to remote working conditions, Chicago-based derivatives exchange CME Group, alongside other exchanges with open outcry pits, was forced to shut them down. Whether they would re-open was uncertain, with rising concerns around the inefficiency and costs of the open outcry system compared to electronic trading.

It was emotional and nostalgic, but not surprising for many when CME Group confirmed on 5 May it would not re-open the open outcry trading pits following their closure in March 2020. The exchange said that all open outcry pits would remain closed on a permeant basis, except for the Eurodollar options pit, which it opened in August 2020.

The development was the first in a series of long-term effects of the pandemic. Many participants are realising the inefficiencies of transitioning back to the office full-time following their highly successful adjustment to working from home. A study by Greenwich Associates in November predicted that a small minority of traders would return to the trading desk, with only 4% of firms surveyed expecting traders to be in the office every day.

In the case of open outcry trading pits, the pandemic acted as a catalyst to speed up a process of elimination that was already ongoing. The open outcry system has been on a trajectory to extinction since the introduction of electronic trading in the late nineties.

Mike Cavanaugh became a floor trader for CBOT in 1998 and remained there until 2003. Originally founded in 1848 as an organised grain derivatives exchange, CBOT later became the go-to exchange to trade agricultural products.

“To see a fully operational open outcry trading floor, a sea of people – it’s chaos and the first time I saw it, I was like, whoa, what is this place? This is insane,” he says. “It was pure, utter chaos. Imagine the most non-politically correct, vile, filthy work environment you could possibly imagine, and then imagine at the same time it’s filled with the greatest people you could ever meet. I don’t know how to better explain it there.”

Mike’s first day was nothing short of a baptism of fire, entering the trading pit for the first time on the day that New York-based hedge fund Long Term Capital Management collapsed. The hedge fund was initially successful, generating more than $1 billion in investor capital between 1994-1998 with the promise of huge returns from a highly-leveraged arbitrage strategy. The strategies, however, didn’t pan out and the fund began to hemorrhage, sending ripples across the market that almost collapsed the financial system in 1998.

“The opening bell came out and the bonds went limit-up, limit-down, limit-up, limit-down –  there were people laying on the floor. It was just chaos. My mentor took my badge out of my pocket, turned it around so nobody could see my acronym, put it back in my pocket, karate chopped my arm and said: keep your hands down, something’s going down! Emotionally, your first reaction is to be scared, but if you show fear people will be all over you,” says Cavanaugh.

“I looked over and there was a guy laying on the floor and I’m thinking what’s he doing? What’s going on? That was my first two-minute indoctrination into the world of trading. The bond market went crazy. If you were caught on the wrong side of it… the guy laying on the floor had fainted because he had a position on that went against them and he just collapsed.”

Mike left the trading pits in 2003, departing  CBOT to become an account executive for My Futures Online, an online futures and options brokerage. He is now managing partner at proprietary investment fund, Regiment Alpha. To him, the trading pits had been heading in one direction since the introduction of electronic trading. By 2005, just 30% of trading volumes came from open outcry trading.

“The floor was dead in 2004, it just slowly died at an ambulatory pace,” Cavanaugh adds. “When the news came out on 5 May, I was more shocked that it took more than 20 years to close the pits. Look at the London Futures Exchange [LIFFE], that went electronic and in seven days London went from having floor traders to the wealthiest cab drivers in the world.

“It is a publicly traded company and the electricity and air conditioning bill to keep 70 people trading in the pit isn’t worth the expense. [CME Group] may have used the pandemic as an easy way out. It’s probably easier than saying the trading pits are no longer the most efficient way to execute orders and futures.”

As the years went by and the portion of on-exchange volumes being executed electronically continued to rise, other events added to the changing attitudes in the pits. Most prominently the merger of the CME and the CBOT to become CME Group in 2006, which saw an exodus of traders leave the pits.

The inefficiencies of the open outcry model had become unavoidable when compared with on-screen trading. The inefficiencies included out trades, which take place when there is a dispute over a trade between two individuals. They are caused by varying scenarios, the most common being when two separate traders think they have bought the same individual order or when there is confusion over the price between a buyer and a seller.

“Sometimes it was difficult to understand what was going on and what was being transacted. You’d have to be very alert and attentive, and you still wouldn’t see everything that happened. But using the trading screen, you see every single trade,” says Farley Owens, president of Trading Technologies, and former clerk and trader at CBOT.

Farley Owens left his graduate job at IBM and moved to Chicago with his college roommate, Harris Brumfield, in 1991 to clerk for him on the CBOT floor in the 10-year treasury futures pit. He left the floor in 1999 to join Brumfield, now the majority shareholder in Chicago-based trading technology provider Trading Technologies (TT), to explore the world of electronic trading.

The introduction of TT’s technology responded to growing demand for globalisation and to trade on multiple exchanges. This was previously a cumbersome process that involved multiple systems and trading over the phone with several brokers. TT’s scope now covers six continents, most recently connecting to the Johannesburg Stock Exchange through an agreement with brokerage Applied Derivatives in October last year.

In the open outcry system Owens says that some of the most successful traders were often the largest ones: “There were definitely advantages to being tall. You needed to be able to get the attention of the brokers. That’s where most of the floor traders were making money and getting the edge if they could spot you or if you had a reputation for being a bigger trader. Someone who could take a large order or a large portion of a big order.

“It was very competitive in the pit, there was a lot of pushing and shoving. There were a lot of ex-athletes and really tall, big guys. It was mostly guys and not many women on the floor.”

The Chicago Flood of 1992 lays witness to the tenacity and the audacity of the open outcry trading pits. Repair work on a bridge crossing the Chicago River burst a disused utility tunnel and flooded basements and facilities across the city. The water damage cut off most businesses from their invaluable power supplies. But not CBOT, laughs Owens.

Generators were sourced alongside hundreds of metres of extension cables running up the side of the building and onto the trading floor, plugged in to keep the floor running while the rest of the city experienced a total power blackout.

“They were able to keep the trading floor open and it was insane because it just shows the ingenuity of people in the business. They’re going to find a way to make things work,” Owens adds.

The addiction to finding a way to make things work has driven the need for better efficiency and execution, sourced through technology. As the ongoing movement towards electronic trading has continued, the closure of the pits has become somewhat inevitable.

On 4 February 2015, CME Group announced that because the portion of its futures trading accounted for by open outcry had fallen to just 1%, the futures pits would close on a permanent basis.

Other trading pits globally are also teetering on the edge of closing. Following CME’s more recent decision  to close its pits on 5 May, Cboe Global Markets reopened its trading pits and confirmed they would remain open as long as investors wanted them.

“Cboe plans to continue to support open outcry trading as long as our customers find value in the trading floor’s deep liquidity and execution quality. Our floor brokers play an important role in sourcing liquidity for their customers. We know our customers find utility and value in open outcry trading, especially for executing larger, more complex orders and rely on the floor for price discovery and the deep liquidity provided by our market makers,” said Cboe Global Markets in a statement on 5 May.

In the UK, the London Metal Exchange’s discussion paper on the potential closure of the 144-year-old pits released on 19 January was met with uproar and the exchange later confirmed on 8 June that the open outcry pit would re-open following its closure during the pandemic.

“They are centralised exchanges and the world doesn’t like centralisation anymore. It doesn’t trust the people making the money in the exchange settings and in the publicly traded company settings,” concludes Cavanaugh.