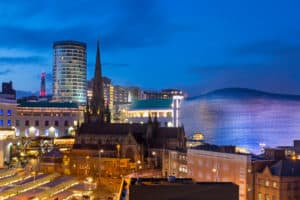 US investment bank Goldman Sachs has said it will establish a new office in Birmingham in the UK later this year focused on technology and engineering.

Goldman Sachs expects to have several hundred staff across several divisions based in the Birmingham office over time as part of its expansion in the UK, including a mix of new hires and existing employee transfers.

Engineering will be the first division in the new office, which the bank said it intends to open in the third quarter this year.

Goldman Sachs stated Birmingham will provide it with access to a new talent pool and STEM (science, technology, engineering, and mathematics) industries to build out its new hub. The city’s proximity to London will also help the bank stay connected to clients and other divisions.

“Establishing a new office in Birmingham will diversify our UK footprint and give us access to a broad and deep talent pool in the local area,” Richard Gnodde, CEO of Goldman Sachs International, commented. “We see tremendous opportunity to enhance our UK presence and continue delivering for our global clients.”

Birmingham is the latest technology hub launched by Goldman Sachs in recent years after the bank established similar offices in European cities such as Stockholm and Warsaw.

In November, Goldman Sachs confirmed plans to operate its European multilateral trading facility (MTF) in Paris in preparation for the UK leaving the EU on 31 December. SIGMA X MTF went live on 21 December to ensure the bank could continue trading European stocks for clients.

« The Reddit revolt: GameStop and the impact of social media on institutional investors