The TRADE > News > Buy-Side > Hedge funds doubling down on algos 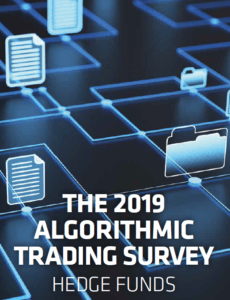 The first part of this year’s algorithmic trading survey, published in Issue 59 of The TRADE, found that brokers had begun to outpace their banking counterparts when it came to satisfying the needs of their long-only buy-side clients in almost every facet of performance.

While there are clear areas of differential performance among various algo providers, the overall showing from the 2019 survey is largely positive, as the industry moves further away from regulatory compliance concerns brought about by MiFID II and reprioritises quality of execution and securing better outcomes for the end investor.

This trend is once again evident from responses provided by the contingent of hedge fund firms in this year’s survey, with the total average score across all algo providers rising to 5.72, a significant increase on the total average of 5.47 in 2018 and even above the pre-MiFID II score of 5.68 in 2017.

The highest score achieved in this year’s hedge fund algo survey was in the customer support category (5.92), closely followed by anonymity (5.81), ease of use (5.81) and improve trader productivity (5.80). There was no area of performance that received a score lower than 5.50 – the lowest being 5.57 for price improvement – which indicates a good overall level of satisfaction among hedge funds towards their algo providers.

Similarly to the responses from long-only buy-side firms, the scoring in this year’s survey suggests that efficiency has become the key watchword for algo end users.

One of the most interesting trends that the algo survey has thrown up in recent years has been the fluctuating number of providers that buy-side firms, both long-only and hedge fund, are choosing to implement and use. In last year’s survey, hedge funds were almost exclusively using greater numbers of algo providers than they had historically – the only exception being on the lower end of the AuM scale – however that trend is now clearly in reverse.

Hedge fund firms that are managing up to $0.25 billion and $0.25 to $0.5 billion in assets were the only two groups to record increased numbers of algo providers this year, with the latter bracket actually doubling the average number of providers year-on-year, from 1.5 in 2018 to 3 this year, still far above the figures from the 2017 survey as well.

Mid-sized and larger hedge funds, however, showed that they have been cutting down on the number of algo providers they are engaged with, most noticeably in the $0.5 to $1 billion AuM bracket, which recorded a sharp drop from  an average 4.5 algo providers last year to just 1.8 in this year’s survey.

There has been a significant year-on-year shift for hedge funds to move towards using between one and two providers, accounting for nearly half of all hedge fund respondents, whereas previously these firms said they were using more than 5 in last year’s survey. All of this would suggest that hedge funds used 2018 as a sort of ‘test drive’ period, to take new algos out for a spin before deciding on which ones they would adopt on an ongoing basis.

The conclusions that can be drawn from this year’s algo survey – incorporating both long-only firms and hedge funds – is that the focus has firmly swung back to increased execution efficiencies and outcomes as the use of algorithmic trading increases, as the buy-side also applies increasing scrutiny on their providers. The question going forward is who among these providers, as the industry begins to eat itself through consolidation, will be left standing to fulfil the evolving needs of the market.

The 2019 Algorithmic Trading Survey for hedge funds can be read in full here.