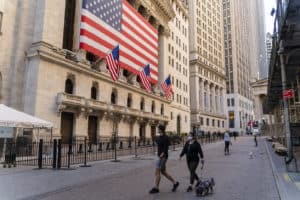 The head of sales and relationship management at the New York Stock Exchange (NYSE) has departed to take on a new role with high-frequency trading firm Jump Trading, The TRADE understands.

Paul Kenyon will leave his position at NYSE this week after almost five years with the exchange operator.

A spokesperson at Jump Trading declined to comment on his appointment.

Kenyon has spent the majority of his career working in sales at US exchanges. He joined NYSE in February 2016 as a director and head of sales and relationship management.

Prior to NYSE, Kenyon spent more than six years with Nasdaq where he held several roles in product management. Upon his departure, he was a managing director within Nasdaq’s global trading and market services division.

Jump Trading is a proprietary trading firm with operations in New York, Chicago, London, and Shanghai.

According to a recent report from efinancialcareers, Jump Trading is preparing to launch a new operation in Paris after advertising jobs based in the French capital. The report added that Sebastien Cortez, formerly global head of algo execution and quantitative market making at Societe Generale, joined Jump Trading this month in Paris.