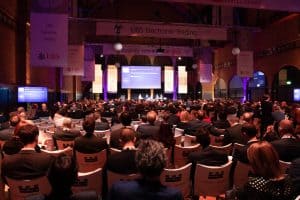 Two heads of desks at major asset management firms have argued against the use of an execution management system (EMS) in fixed income markets, claiming to have instead built similar and efficient tools in-house.

Delegates were asked if they agreed that the fragmented nature of fixed income demanding the continued need for high touch trading means an EMS is not a key requirement for the buy-side, with 42% of the audience in agreement. By the end of the debate, almost half of the audience agreed with James and Couellan.

“I am against the EMS in fixed income because it adds a layer to the process which is completely unnecessary,” James said. “Within our own order management system (OMS), we have around 700 days of trading data that we can review ourselves for no cost and without the help of an EMS.”

Those arguing the case for the EMS in fixed income instead stated the tool is imperative for evidencing best execution processes, generating alpha, aggregating data, and at the same time, building a similar tool in-house is a near impossible and costly task.

“Alpha doesn’t just happen at the point of execution, it’s about pre-trade analysis too, and for me, the EMS is not the place you want to have that discussion,” James countered. “We have built a pre-trade tool which is embedded into our OMS, with our own rules that gives us our own unique data. That is different to everyone else who does use the EMS, which gives us that edge and generates alpha. EMS is old technology and the buy-side should be looking forward.”

Joeri Wouters, senior fixed income dealer at KBC Asset Management, countered that conversations in the past have often focused on the problems around handling data and creating a comprehensive best execution process, but the EMS is in some cases the solution to those problems.

“The development of a comprehensive EMS in fixed income is an almost impossible task,” Wouters added. “The EMS adds value to my high-touch trading, low-touch trading and at the same time, it frees up my time to focus on the data.”

BNP Paribas Asset Management’s Couellan told delegates that his desk has built various tools which leave him with no need to implement an EMS, while James added that the EMS is a tool for equities and not for fixed income, which need to be handled as two very different asst classes.

“Today’s EMS is just adding to market impact and at some point it is affecting my quality of execution,” Couellan argued. “We haven’t built an EMS ourselves, but we have built a tool to monitor market value with post-trade analytics etc. As a buy-sider, if there is choice, I would say we need a tool that differentiates us from the competition. The tool we have built was very cheap to produce and suits my trading needs which are very specific.”

In the closing arguments, FlexTrade’s head of sales, Andy Mahoney, stressed that the EMS for fixed income is in fact not taken from equities model, and wished those asset managers who are building their own in-house EMS good luck with the task.

“Some in the industry think that we put an equities EMS into the fixed income world, but that’s not correct – we have built a whole new product,” Mahoney said. “The reality these days is that you need to evidence your best execution processes, and data aggregation won’t become a simpler problem. If you are gearing up to build this yourself, then I feel sorry for you because it will cost a lot of money.”