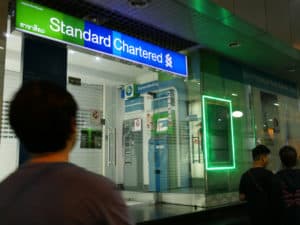 Investment bank Standard Chartered has set aside a total of $900 million to cover financial penalties it expects from regulatory authorities in the US and the UK.

In a statement ahead of announcing its full year results on 26 February, Standard Chartered said that the penalties are related to historical violations of US sanctions laws, as well as UK financial crime control failures.

The UK’s Financial Conduct Authority (FCA) has handed Standard Chartered its decision notice related to a previously disclosed investigation regarding the bank’s financial crime controls, imposing a penalty worth more than £100 million net of a 30% early settlement discount.

The $900 million provision will also cover Standard Chartered’s recent $40 million fine from the New York Department of Financial Services, after some of the bank’s traders were found to have used chatrooms to rig and manipulate FX trading activities.

“Standard Chartered continues its discussions relating to the potential resolution of the previously disclosed investigation by the US authorities relating to historical violations of US sanctions laws and regulations,” the company said in its statement.

“This provision reflects management’s current view of the appropriate level of provision. Resolution of the US investigation and of the FCA process might ultimately result in a different level of penalties.”