The TRADE > News > Buy-Side > Two worlds collide: Is the buy-side on a path to the CLOB?

As Figure 1 (below) shows, 58% of U.S. Treasury bonds were transacted electronically at the end of 2018 — a great achievement considering a mere 13% of the market traded electronically in 2001. A jump in U.S. Treasury e-trading occurred between 2002 and 2006, along with other asset classes. After the initial lift-off, however, the pace of adoption has since plateaued.

While the vast majority of interdealer trading takes place electronically, the dealer-to-client (D2C) market has lagged. In a partnership with The TRADE, Aite Group reached out to buy-side institutions to gain insight around the adoption of electronic trading of U.S. Treasury bonds. Preliminary data suggests there are some encouraging signs. However, human psychology and market infrastructure may scale back the breakaway from traditional dealing.

Aite Group first attempted to gauge the degree of e-trading adoption and the means by which it happens across various institutions, such as hedge funds, asset managers, pensions, insurers, and principal trading firms. Figure 2 (below) describes the percentage of surveyed firms trading U.S. Treasury securities electronically. Although some participants indicate they are transacting all or most of their U.S. Treasuries by electronic means (38%), many are still relying on some electronic trading paired with other methods.

To get a better idea of how buy-side firms are mixing and matching their executions, participants were asked to select the number of methods and venue types they use.

As Figure 3 (below) shows, almost every buy-side firm surveyed trades on a multi-dealer platform (MDP). More than half also still rely on voice trading, which hap-pens over the phone or via chats and instant messaging. A small number of buy-siders also access the interdealer market via the central limit order book (CLOB).

MDPs have been around since the late 1990s, so it’s no surprise that buy-side firms looking to get bids and offers in competition would turn to them. In fact, when asked which protocol is preferred, 87% of survey participants point to request-for-quote (RFQ), the hallmark of the multi-dealer environment. Digging a bit deeper, it’s reasonable to believe that most buy-side institutions use a combination of two to three tools to execute U.S. Treasury securities.

The dispersion of business done on MDPs versus other venues and methods is fairly wide. Figure 4 (below) compares the minimum, maximum and average of the percentage of business directed to a platform or execution method.

Several participants indicate 100% of their business was done via an MDP, thus resulting in the highest average score of directed flows (63%). Although fewer participants indicate they have access to the interdealer market, it is notable that, on average, nearly half of their U.S. Treasury business flows to the likes of Brokertec (48%).

Lastly, the figure shows that voice trading isn’t going away any time soon, as several firms believe they get better execution and information when they speak to their broker directly.

Is buy-side participation in the CLOB imminent?

It’s difficult to pin down exactly what will move the needle to make buy-side firms more accepting of a world beyond RFQ and voice trading. Some in the industry suggest executable streams may be an interim step that is gaining ground, while others believe the shift to full electronification and even automation will take a more direct path. The interdealer market for U.S. Treasury securities is considered a deeply liquid premier marketplace.

According to preliminary data, 80% of buy-side participants indicate they would like the ability to view the CLOB as a tool to better understand where the market is trading at any moment (Figure 5, below). Half of these participants would consider participating as well. While it seems intuitive that more information is better than the point-in-time live pricing afforded by RFQ and even request-for-stream protocols, the differences between the wholesale market and the D2C venues are substantial and present several material barriers.

Whether the buy-side is ready to qualify under the rulebook to participate  and engage in anonymous trading remains to be seen. 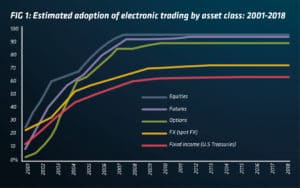 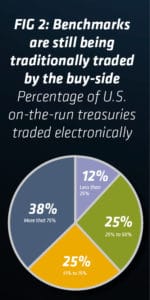 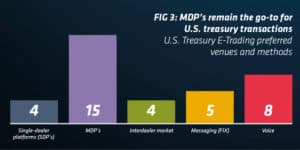 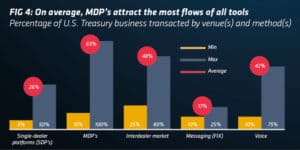 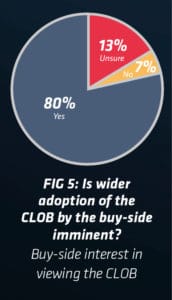