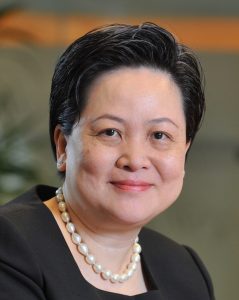 Hayley McDowell: Having announced your plans to step down as CEO at EuroCCP, describe your journey with the company over the past ten years.

Diana Chan: I became chief executive at EuroCCP when the multilateral facilities (MTFs), which were enabled under the first MiFID, started setting up in 2007. I had already been working on pan-European post-trade issues for a few years, and felt that leading EuroCCP, a new financial infrastructure, to bring about competition and change in equities trading was what I wanted to do next. I am very happy to have achieved that objective, in spite of many challenges along the way.

MiFID introduced competition to stock trading, so that the same stock could be traded on multiple trading platforms across Europe. The first MTF, Chi-X, eventually became a runaway success. EuroCCP was set up to provide clearing for the second MTF, Turquoise, which was started by a consortium of nine investment banks. Fast forward a few years – the firms that traded on the MTFs realised that when they trade the same stock on multiple platforms each using different central counterparties (CCPs), they needed to settle the same stock and provide collateral to each of those CCPs. It was not efficient and expensive.

The solution was for each trading platform to appoint more than one CCP, so that trading firms could direct their trades in the same stock on multiple trading platforms to the same CCP. The CCP would then net the firm’s trading positions across all platforms it clears for, resulting in a single settlement per stock and a single margin requirement on the net position. This would require all the CCPs clearing for the same platform to interoperate – that is, have arrangements in place to manage their exposure to each other. But it was not easy for the incumbent CCP on a platform to agree to let in a competing CCP to share its business.

The problem was solved when Bats Exchange introduced an arrangement called “preferred CCP” in 2011. Bats added three CCPs that interoperated with each other, without requiring the incumbent CCP to interoperate. The six firms that made the switch on Bats all preferred EuroCCP. It meant that if a trade was executed between any of those six firms it would be cleared by EuroCCP, and if not, it would default to the incumbent CCP. The trial proved that when firms were given a choice of CCP, they would indeed move their business. Then Chi-X, the largest MTF at the time, became four-way and fully interoperable in 2012. Within 30 days, 40% of the Chi-X volume came to EuroCCP from the incumbent. By 2013, EuroCCP and the incumbent CCP on Chi-X and Bats started talking about merging and EuroCCP N.V was created after combining the two CCPs. The combined company is now the largest equities CCP in Europe clearing for nearly 30 trading platforms, including not only for MTFs but also a number of national stock exchanges.

Six years later, a choice of three interoperating CCPs has been extended to 70% of all equities trades in Europe. Choice of CCP for a further 25% is expected to be offered by the end of this year. The post-trade space is far more efficient now with competitive clearing.

Many market participants were initially sceptical about interoperability. The doubters either said it would never happen because of protectionism, or that it would never work because the risks could not be managed. But it did, and it has proved to be a great success. In the ten years I’ve been running EuroCCP, the market has transformed considerably for the better. Competitive clearing has brought clearing costs down by more than 90%. If you were to add up all of those savings over the past ten years, it would easily amount to more than €1 billion. That was a major accomplishment and we are very happy to have spearheaded this change in Europe.

HM: What do you see as your legacy with EuroCCP and what does the next decade hold for the company?

DC: EuroCCP has experienced a decade of tremendous growth and has made a huge difference in the market. I am very happy to have been a part of that transformation of the market and of EuroCCP, which has gone from being the CCP to a single MTF to becoming the most connected CCP in Europe, clearing also for many national stock exchanges. We now have access to 83% of the flow in Europe and by year-end we expect to have 95%.

For the next decade, shared infrastructure for equities clearing makes sense. It is demanding to comply with new regulations so the fixed cost component of running a CCP is always rising. Investors in Europe are now paying for more than ten CCPs that clear equities. The MTFs and national stock exchanges that are served by the interoperating CCPs have demonstrated that equities trading does not depend on clearing as a strategic competitive advantage. Investors in Europe would be better off if post-trade costs are taken out by eliminating duplicated infrastructure. EuroCCP is co-owned and used as a shared infrastructure by three stock exchanges – there is certainly room for more to join.

Opportunities for asset class diversification into fixed income or derivatives are regularly reviewed by the company. The main challenge is access to trades. Fixed income is mostly a bilateral market adjacent to repo transactions, with strong network effects and incumbent CCPs that are unlikely to want to interoperate. Derivatives is characterised by exchanges asserting intellectual property rights over the indices and contracts, which constitute a barrier to entry. The market structure of these asset classes is very different from shares.

Two years ago EuroCCP announced plans to diversify into clearing securities finance transactions. Although there is much potential for savings from capital and operational efficiency, it soon became apparent that firms were spending a considerable amount of time and energy on preparing for Brexit. Many firms did not have the bandwidth to do non-mandatory things while they were trying to prepare for the UK leaving the EU. Firms simply don’t have the time to connect to a new service regardless of the benefits of us clearing those types of transactions. For the moment, that project is on hold. But the company may return to it if clearing of those transactions becomes mandatory through regulation.

HM: Looking to the future of clearing, do you see any trends developing at the moment?

DC: With MiFID having broken down the rules on exchanges that prohibit their own members from trading with anyone else, we have seen a gradual move towards open access and interoperability. More and more stock exchanges are probably close to realising that there is no competitive advantage to doing their own equities clearing, but changing the status quo involves investment and effort.

EuroCCP is owned by three exchanges, Nasdaq, Cboe Global Markets and Euronext, so the firm is positioned very strongly in the market. Each owns 20% of EuroCCP, while the remaining 40% is owned by two other shareholders, ABN AMRO and DTCC. It is truly an open model where shareholders ensure that there is dynamic efficiency in equities clearing through strong competition. Interoperability has become the norm in Europe, and shared infrastructure among stock exchanges is the logical next step in the evolution to a more efficient post-trade configuration.

Moving forward, interoperability must become less expensive, with the reduction of inter-CCP margin levels and settlement volumes among the three interoperating CCPs. If we solve that problem, we will solve the scalability problem at the same time so that more CCPs can join the interoperability cluster. Once that happens, more CCPs can compete and I believe that’s when we will see consolidation. EuroCCP’s business model is to be a shared infrastructure, and shareholders are open to the idea of more exchanges investing in the firm. Why have your own CCP, when you can join EuroCCP as a shareholder and offer the lowest clearing fees to your clients? There is no competitive advantage to clearing your own equities trades.

HM: What’s the latest in terms of EuroCCP’s preparations for Brexit?

DC: As EuroCCP is an EU Dutch-based clearing firm with UK participants and clients, the firm has discussed Brexit with the Bank of England in great detail. Before the European Market Infrastructures Regulation was introduced, the Bank of England had a regime called Recognised Overseas Clearing House or ROCH, which allowed non-UK CCPs to clear for UK platforms and UK participants. It is considering introducing a similar regime post-Brexit and EuroCCP has already submitted an application to gain that recognition status.

HM: How important will new technologies blockchain and artificial intelligence (AI) in the post-trade industry?

DC: Much has been said and written about the potential of blockchain or distributed ledger technology (DLT). DLT initiatives in financial services mostly employ closed ledgers, which means they operate like a database with different levels of access permissions among people who know and trust each other. The biggest value of these initiatives so far is that they bring people together to work jointly on a common solution, which they might not have the incentive to do without the lure of a new technology.

If I were to put my money somewhere, I would put it on AI. It is truly innovative and it has very practical applications to do things that have not been possible before, for example in recognising patterns of behaviour through big data. It requires huge investment and know-how, so at this pioneering phase it’s for larger institutions rather than smaller. If those larger firms use AI to become more efficient, then the question is: how can the smaller firms compete? The implications of the use of AI have the potential to be enormous and we are only now just beginning to get an understanding of what they might be.