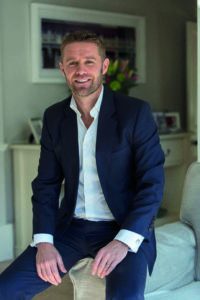 “As a paratrooper I was shot at, shelled, lost friends and saw many live through life-changing injuries. But having spent nearly as long going to work in a suit as in body armour, I’m not sure our minds can distinguish between someone sniping at you on the battlefield or on the trading floor – both take their toll.”

For Sam McGrath, a strong mindset has created the foundations on which he has built his life.

From rising through the ranks within the British Parachute Regiment and scaling the heights of the investment banking world, to professionally competing in ultra-marathons and raising four children, he attributes his achievements to a mentality forged in the army and sharpened with each subsequent life experience thereafter.

Now adding published author to his growing list of accomplishments, his story has become as compelling as it is inspiring. For the dedication, philosophy and mental strength which underline his countless successes are attainable, trainable and – perhaps most importantly – relatable.

“If you saw my high school grades and final report, you’d see nothing noteworthy and precious few achievements,” he explains. “But since then all I’ve done is attempt to turn weaknesses into strengths; which has gone from being an act to a habit.”

History has always celebrated the narratives of war heroes. Throughout the world their stories have even served to inspire entire nations. These days, most household names tend to hail from sporting arenas or our TV screens, but there still remains a profound respect and appreciation of the military within our societies. This comes from the bravery, discipline and work-ethic traits associated with a soldier. Qualities we all aspire to possess. 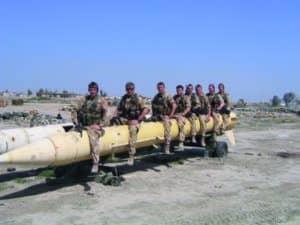 The army distilled these characteristics within McGrath from the outset, building up his mental fortitude and leadership skills during his training and early years within the Parachute Regiment. For those unfamiliar with unit, it is known for being formed in the storms of war and becoming Winston Churchill’s spearhead unit for the most dangerous military operations. On the surface, the regiment is synonymous with the act of parachuting, but for those who know it well, the association is more with teamwork and the division’s mantra of: ready for anything.

Training for this is no breeze, even by the army’s standards. Unlike conventional soldiers, paratroopers must be able to perform with just the equipment they carry on their backs, they are dropped into uncertain situations following dangerous and uncomfortable journeys and resupply is often only available by air.

Even after months of training, they are put through a Test Week with 12 hand-picked instructors to determine their selection. This monumental challenge consists of eight separate mentally and physically enduring events, and anyone who does not perform to the required level will fail the course. Not only did McGrath successfully complete the infamously rigorous training for the Paras, he was selected to command it 10 years after passing.

His military career went on to include tours of Northern Ireland, Iraq and Afghanistan in a decade where McGrath had become one of the youngest officers to reach the rank of major since World War II, it’s safe to say he came into the capital markets with a legacy.

“The Parachute Regiment was an incredible training ground for leadership. It equipped me to tackle one-off complex projects with the highest possible stakes amid severe time, information and resource constraints,” McGrath says. “I’m in no doubt this skillset has helped turbo charge my second career – even if I’ve had to moderate my approach to the competition.

“At a team management level, I believe leading elite soldiers and elite bankers requires many of the same traits. When you have a group of highly capable and motivated people, the more you maximise autonomy and accountability, the more you collectively achieve. So, I try to lead more like a gardener than a chess master – giving my people space to operate along with enough stress and praise for them to blossom.”

McGrath’s career in financial markets was by no means handed to him, and it was probably the familiar notion of hard work paying off that spurred him on in part two of his professional journey.

After leaving the Parachute Regiment, he completed an MBA in 2009 and subsequently earnt a role at Barclays to work in FX sales. No stranger to a challenge, this one came in three parts: firstly, the new job; secondly, moving to Singapore; and finally, welcoming his first child into the world.

It was fair to say McGrath was experiencing a wholesale change in his life and once again being forced to tap into his military-grade mindset to not only adapt, but thrive in this new domain. 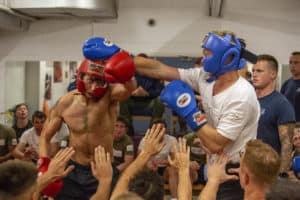 After almost three years, he was headhunted by RBS in Singapore for a similar FX sales role, before the opportunity at Standard Chartered arose and McGrath become executive director, head of bank sales in June 2014. A promotion then elevated him to managing director in 2016. McGrath was rising through the ranks again, this time in the corporate world.

“I feel deeply privileged from my training, time and association with the British Army; precious few institutions instil that same level of trust. I’m also in no doubt that my military career has helped secure the confidence of hiring managers and clients alike, opened doors and created opportunities that otherwise wouldn’t have existed,” McGrath explains. “But equally, I’m clear there’s a higher expectation to perform that goes with it as well as moral obligation to other veterans to live up to this.”

Now working in the front-office for Standard Chartered’s investment banking arm, McGrath is leading teams and advising C-level executives within the firm on how best to optimise all business models across the division. He describes the role as “challenging and all-consuming”. Being able to balance the demands of the role alongside a fitness regime and family life has become McGrath’s forte, despite acknowledging the challenges when he first made the transition from the Regiment to capital markets.

In his book, he writes: “Within a year I found the rhythm of corporate life corrosive to my health: 11-13 hours at a desk, wedded to a smartphone, late-night conference calls, client entertainment, long-haul travel, to say nothing of the numerous family milestones missed or not enjoyed due to a preoccupation with work.”

It’s now been 20 years since McGrath passed selection for the Parachute Regiment, and just 10 years since he made the transition to investment banking. But he has tried never to abandon the rigorous training regime and mentality ingrained in his twenties. After the overwhelming feelings he was experiencing in that first year he refers to in the quote above, McGrath made the decision to stop sacrificing health for wealth and introduced a plan to integrate a demanding physical fitness regime into his life.

Perhaps surprisingly, he insists he’s fitter now than ever before, despite now occupying a day job which doesn’t require an elite fitness level as a pre-requisite, unlike his military days. 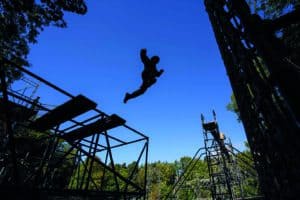 In his new book – Be Para Fit – McGrath provides a guide for his industry counterparts to fit an effective training regime into their daily schedule, just as he has done himself. He insists that since leaving the Paras, he has perfected an efficient and impactful schedule and is keen to share this with others.

You may think this is easy for someone with a decorated military background, and top 10 finishes in seven ultramarathons, but McGrath shuns the label of “superhuman” and is adamant it only takes four weeks of commitment to embed a training regime into day-to-day life.

“Distil anything to a headline and it looks more impressive than it really is and there’s a catalogue of false starts and near misses lurking beneath the surface. If I have any super powers it’s a belief that anything is possible, which I owe to my parents, and a grit to keep going where most give up, which I owe to The Parachute Regiment.”

Health and fitness is deep-rooted in McGrath’s life philosophy, and has underpinned every move he’s made. He believes it makes him a better father, partner and worker.

Now for those who claim they don’t have time, consider that McGrath has been training for ultra-marathons during his time in investment banking, while raising four children and penning two books. He says the regime doesn’t compete with his work and family commitments, rather it complements them.

For the Parachute Regiment, the intense training readies its recruits to not just survive, but thrive in adversity, and the exercises they undertake builds a mindset which allows them to do just that.

Six hours is all it takes

Moving into his role as managing director, corporate and institutional banking, McGrath knew he wouldn’t have the time he used to, but believes just six hours a week is enough to be “Para Fit” if you prioritise and schedule.

“There’s not a part of my life that hasn’t been enriched by a daily training regime and concurrently investing in my health through sleep and nutrition,” McGrath adds. “But I believe the single biggest benefit of pushing your body physically is the mindset it fosters; which equips you with the confidence, grit and self-reliance to lean into any professional challenge and keeping going as those around you give in.” 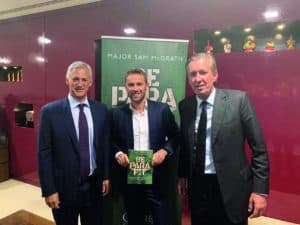 Completing an ultra-marathon is one thing, but competing is another. For McGrath to boast top 10 finishes across multiple races while juggling the other commitments in his life is, quite frankly, incredible. Again, he puts this down to mental strength.

“I’d say an ultra-marathon is at least 99% mental – they forge character far more than they do fitness,” McGrath says. “The uncourageous don’t try and the weak give in. It’s rare I don’t rationalise giving up on most long races as the most responsible thing to do. I’ve come to enjoy overcoming the mental chatter and using ultras to tap into a well of mental and physical reserves that I believe we all have, but rarely get to call upon.”

Anyone in a front-office trading role within the capital markets will have had to boast some of the characteristics that McGrath values so highly. Dedication, resilience and focus to name a few. Some might event view the individuals in these roles as the industry’s own elite performers. But while we often look to athletes and celebrities for inspiration, McGrath’s story may serve as a source of motivation from within the industry for anyone looking to elevate both their career and personal growth story.

After soaring through the echelons of the military hierarchy, McGrath has shown that a disciplined regime can benefit any aspect of your career, personal life and fitness, no matter your circumstances or age. His journey has made for an incredible story, but also a lesson in what can be achieved with the right mindset and planning.

“I think it’s possible to endure most things if you believe in what you’re doing – fitness or otherwise,” he concludes. “What feeds motivation is upstream, what you choose to give your time and talents to – not in the moment things get difficult. Whether I’m burning midnight oil at work, helping a daughter with her homework or running through cramp on an overnight race, what ultimately fuels me is a fundamental belief that what I’m doing is important and worth the effort.

“So, I try and get ahead of this by having a really structured approach to goal setting, so I can be sure everything I commit to is aligned to what matters the most. Thereafter it’s just one step after the other.”

McGrath’s book – Be Para Fit is available now on Amazon – and all royalties are going to the Parachute Regiment’s charity – Support Our Paras – helping those veterans and their families in need.