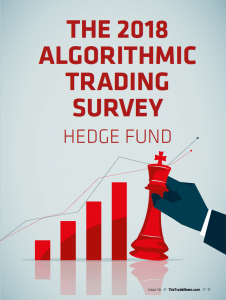 Hedge funds have shown far higher levels of expectations from their algo providers in 2018, particularly from banks, as the realities of the new electronic trading environment under MiFID II bed in, according to The TRADE’s Algorithmic Trading Survey 2018 for hedge funds.

Although these may be early days in the grander scheme of the MiFID II era, the results of this year’s survey indicate that hedge funds are already targeting key areas of algo functionality for review which could go some way to informing strategies and provider relationships.

With providers rated across 14 separate categories of algorithm performance and functionality, the overall score for algo performance this year was 5.47, which, while a respectable score in the face of a changing trading landscape, was still lower than last year’s average of 5.68.

There were decreased year-on-year scores in 12 of the 14 performance categories reviewed, with the only increase seen in the execution consulting category, which is to be expected given the sell-side’s intense focus on this attribute in the run-up to the introduction of MiFID II.

However, it was agency-brokers that performed well in this year’s survey, as banks received largely decreasing scores, or at best consistent year-on-year scores. While many in the industry had expected specialist brokers to be among the hardest hit by the new regulatory regime, early signs suggest that improvements to their algo offerings are doing well among hedge fund clients.

A desire for reliability and simplicity from hedge funds was also evident in the survey, similarly to long-only counterparts as reviewed earlier this year, where in a post-MiFID II environment buy-side firms are less concerned with getting better prices from their algo trading – one of the most significant year-on-year decreases among hedge funds – which around 5% of respondents using algos for price improvement.

The survey also found that mid-sized hedge funds were much more willing to engage with a host of algo providers over the course of the year, with the average number of relationships increasing from 1.56 to 4.5.

Clearly these firms are taking advantage of the competition in this space to review their options in the new regulatory environment as a competitive differentiator, going against the expectations that buy-side firms would, on the whole, seek to reduce the number of brokers they dealt with once MiFID II came into effect.

Whether hedge funds continue to engage with as many algo providers going forward remains to be seen, but the onus is now firmly placed on the sell-side, and banks in particular, to outperform and meet the increasing expectations of their clients in what will surely be an ongoing evolution to the markets, as MiFID II becomes less about compliance and more about getting the best returns possible.