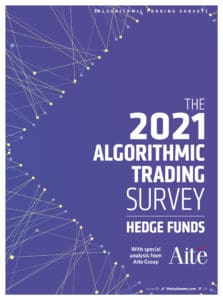 The global equity market went on an unprecedentedly wild roller-coaster ride in 2020. After a dramatic sell-off in March of last year, markets quickly recovered and major indices continued reaching record highs. The volatile market conditions, high trading volume and drive for rapid digital transformation to cope with the remote working environment have all contributed to the uptick in algorithmic trading.

Despite the initial shock, investors haven’t shied away from the market; on the contrary, not only have institutional investors been actively engaging in the market, but the rising trading flow from retail investors has also created a notable impact on the total market. Under the current macro-economic environment, with historic low interest rates, government stimulation and the soon-to-be reopened economy, a higher adoption rate of algorithmic trading in the equity market is to be expected to help traders achieve best execution and optimal liquidity options.

In 2021, the average score of hedge fund respondents to the Algorithmic Trading Survey was 5.82—a consistent increase from the 2020 score of 5.77 and the 2019 score of 5.72. These scores provide an insight into the qualities that the industry values, such as usability, and reflect the confidence that the sell-side can provide relevant and high-quality liquidity, including access to dark pools, alternative trading systems and systematic internalisers in Europe and the US. The survey reveals that the most impactful features of algorithms are ease of use, customer support, dark pool access, increased trader productivity and speed (Figure 1).

Following 2020, when the category received the highest score of 6.02, “ease of use” again scored the highest of all categories at 6.06. “Customer support” follows at 6.04 in this year’s survey. It is interesting to see “ease of use” increase its score year-on-year over the past four years, underlining the importance of user-friendly front ends and streamlined technology in the modern trading environment. Notably, “increased trader productivity” recorded the highest year-on-year score increase in this year’s survey, up 25 basis points to 5.98. This jump shows the growing role that algos play in boosting the performance of traders and indicates the industry is becoming more comfortable with and proficient in its use of algorithms. “Algo monitoring capability” marks the second-highest jump in score, having boosted its score from 5.5 to 5.7. “Dark pool access” recorded an increase of 0.11 and remains among the top-rated categories despite the push from European regulators to shift trading onto lit venues.

Algo providers have done well in providing usable and efficient solutions. However, there is still progress to be made when it comes to other algo characteristics. While the average score and most individual scores in 2021 were up from 2020, some categories recorded a slight decrease. “Execution consistency” received a lower score of 5.76 in 2021, down 0.10 from 5.86 in 2020. “Price improvement” also experienced a decrease of 0.09 to arrive at 5.55 and emerged as the lowest scored category. “Execution consulting and pre-trade cost estimation” and “customisation” are among the lowest scores, with 5.60 and 5.67, respectively, reflecting concerns from hedge funds about how well the sell-side is able to provide feedback on the performance of algos.

While progress has not been consistent across all areas from all algo providers, the range of the average scores tightened from a minimum of 5.55 to a maximum of 6.06. This indicates that the industry is beginning to refocus on the quality of execution and achieving better outcomes for the end investor, even though room for improvement remains. Initial concerns brought by the revised Markets in Financial Instruments Directive (MiFID II) have evolved from managing the compliance requirements, particularly around best execution, to fine-tuning algorithmic trading strategies as a major component of e-trading usage.

Survey participants indicated that their reasons for using algorithms are primarily associated with “ease of use” (11.21%) and “reduction of market impact” (10.78%), followed by “increase of trader productivity” (10.29%), as shown in Figure 2. The fact that “ease of use” continues to place among the top reasons for using algos year after year emphasises the value that buy-side firms place on simplicity and reliability. Between 2020 and 2021, the top two reasons for using algorithms are increasingly motivating factors while some categories have switched places in their importance: “consistency of execution performance” has dropped from the top three to fifth place at 8.68% and “lower commission rates” moved up two spots at 9.27%.

“Flexibility and sophistication of smart order routing” and “customisation of capabilities” are increasingly important drivers when it comes to more algo usage. This is especially true as usage has become more harmonious across the industry. The buy-side is getting more sophisticated and requires more fine-tuning to meet very specific trading needs, such as customised closing auction strategies and enhanced liquidity-seeking options, particularly with strategy that looks to the rising retail flow.

The 2021 data shows that, on average, hedge funds have cut back on the number of algo providers they engage with, yet larger managers are still associated with a higher number of providers than smaller managers. This is still down to the requirements associated with managing a larger multi-asset class portfolio. Looking beyond equity algorithms, the rise of algo use in the foreign exchange (FX) asset class has grown over the years for spot trading and, recently, has begun to extend to FX derivatives such as non-deliverable forwards. As algo providers strive to provide comprehensive multi-asset solutions, hedge funds start to rely on certain types of providers more than ever. The relationship just got stickier.

Figure 4 further shows a clear trend that hedge funds are using fewer providers. Over 35% of the responses reported using one or two providers, a large increase from 23.8% in 2020. Additionally, the percentage of funds using five or more providers decreased from 46% in 2020 to 41% in 2021, and the percentage dropped from 30% to 23% for the those using three or four. Nonetheless, the largest group of the responses still reported using more than five providers, as the benefits of using a variety of algo providers still prevail—until next year’s survey. It will be interesting to see if further consolidation happens and more buy-side firms use only one or two providers.

In terms of the types of algos that hedge funds have been adopting for their trading strategies, Figure 6 shows that the most popular algo strategies are “dark liquidity seeking,” followed by “VWAP,” even though the percentage of the responses for “dark liquidity seeking” slightly declined by two percentage points to 68%. Interestingly, the percentages for most algo usage have decreased, except for the “other” category. The only algo to have recorded the same percentage since 2020 is “percentage volume (participation)”. The algos that recorded the largest decrease in adoption were “implementation shortfall (single stock)” and “TWAP” by dropping 10 percentage points each, to 44% and 27%, respectively, in 2021.