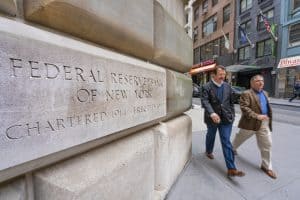 Nasdaq’s president and chief executive officer has been chosen to sit on the board of directors at the Federal Reserve Bank of New York.

Adena Friedman was elected as a Class B director representing Group 2 which consists of banks with capital and surplus between $40 million and $2 billion, the Federal Reserve Bank said in a statement. She replaces David Cote who stepped down from his position on the board of directors in March this year, and will fill the unexpired portion of Cote’s term which ends in December 2019.

Prior to her appointment as CEO at Nasdaq, Friedman was chief operating office at the exchange operator overseeing the company’s business segments and focusing on driving efficiency, product development, growth and expansion.

Friedman first joined Nasdaq in 1993, serving in a number of leadership roles including head of data products, head of strategy and chief financial officer. In 2011 she joined private equity firm The Carlyle Group, becoming CFO and helping lead its IPO, but moved back to Nasdaq in 2014.

The Federal Reserve Bank of New York also announced that Glenn Hutchins, who is co-founder of private equity firm Silver Lake and a director at Virtu Financial, has been re-elected as a Class B director on the board, representing banks with capital and surplus of more than $2 billion.

James Gorman, chief executive of Morgan Stanley, has also been re-elected to the board as a Class A director representing banks with capital and surplus of more than $2 billion. He will serve a three-year term ending December 2021.