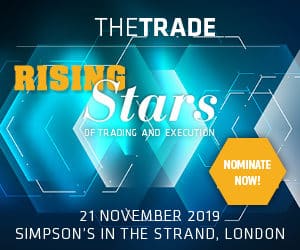 The TRADE’s Rising Stars of Trading and Execution Awards returns for its fifth year, recognising the most promising up-and-coming talents in trading.

Nominations are now officially open for candidates under 40 years of age and currently in a trading role with a buy-side firm until 7 October. This year’s Rising Stars will be announced online on 21 October.

The Rising Stars event will be held at Simpsons in the Strand, where each Star will be presented with their award, before being invited to The TRADE’s Leaders in Trading ceremony on 21 November at The Savoy hotel.

Visit our nominations page to submit your entry for consideration for either a colleague, yourself or an industry peer.