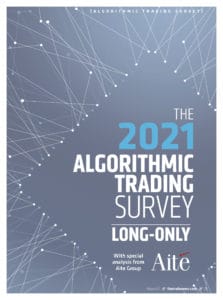 2020 was a wild year for global equity markets and that is putting it mildly. After investors watched on in horror last March as the dramatic sell-off in markets seemed to spell financial Armageddon, it did not take too long for central banks and governments to realise the seriousness of the situation. An enormous program of bond-buying and rate cuts set the stage for a series of record-breaking rallies and heightened equity market activity as companies looked for financing and restructuring solutions.

Despite an unprecedented year-long restriction in economic activity, markets are now poised for a global recovery with investors bullish on the prospect of strong growth in business confidence and corporate earnings globally. The investments in technology and software that the financial services sector has made largely paid off through the relative seamlessness with which the industry has handled the turmoil of the past year. Just as the pandemic has underscored the centrality of large technology companies in the modern economy, it has been a reminder of the importance of sophisticated digital solutions for successful investment management strategies. In particular, the volatility, best execution requirements and the working from home environment of the past 12 months has created a fertile environment for algorithmic trading.

In this year’s survey of long-only funds the average score of respondents is 5.81 – an increase from both the 2020 score (5.71) and the 2019 score (5.74). In 2021, the most impactful features of algorithms are ease of use, customer support and services, dark pool access, execution consistency and increased trader productivity (Figure 1). Following from high scores of 5.96 and 5.92 respectively in the 2020 survey, support services and ease of use both scored 6.01 in this year’s survey. It is interesting to see ease of use increase its score year-on-year over the past four years, underlining the importance of usable and streamlined technology in the modern trading environment.

Increase in trader productivity marks the second highest jump in score, having increased by 0.16 from 5.80 to 5.97.  This jump shows the growing role that algos play in boosting the performance of traders. While all scores in 2021 were up from 2020, dark pool access recorded the smallest increase at only 0.02. While dark pool access remains a highly rated feature of algos, the push from European regulators to shift trading onto lit venues means that long-only firms are increasingly looking for other features in addition to dark pool access.

Respondents’ reasons for using algos, presented in Figure 2 as a percentage of responses, differ between 2021 and 2020. Overall, increases can be seen in seven areas of algo trading versus last year: ease-of-use, reduce market impact, lower commission rates, better prices, higher speed, customisation and pre-trade estimates. At the same time, decreases are seen in six areas: consistency of execution, trader productivity, greater anonymity, smart order routing, algo monitoring, routing logic. The emphasis seems to be on working orders at speed and with ease, and in a way that is cost effective. There is less interest on information leakage, execution consistency and trader productivity.

It is clear that long-only funds of varying sizes are looking to at least two algo providers, with all AUM categories of long-only respondents reporting an average number of providers greater than two in the 2021 survey (Figure 3). From a diversification and business-continuity perspective, managers are seemingly unwilling to place all of their eggs in a single basket and risk a provider outage. The smallest firms managing US$1 billion or less seem to be most comfortable with using approximately two providers, although the average number of providers is up in 2021 compared to 2020 for these smaller managers. Larger firms managing upward of US$1 billion are more likely to rely on three providers, though the average number of providers is down in 2021 compared to 2020 for the largest managers in this year’s survey.

Going further, long-only managers with US$0.25 billion to US$0.5 billion in AUM show a year-on-year increase in the number of algo providers, rising to an average of 2.5 in 2021 which is up from 1.83 in 2020. One explanation for this is that the unprecedented market volatility of the past 12 months compelled smaller managers with fewer resources to expand their range of partnerships. By contrast, larger managers in all categories above US$1 billion have reported declines in the average number of providers compared to 2020. Cost pressures have accelerated the move to consolidate relationships, with managers representing over US$50 billion reporting using 3.89 providers (down from 4.02), managers representing between US$10 billion and US$50 billion reporting using 3.47 providers (down from 4.25), and managers representing between US$1 billion and US$10 billion reporting 2.94 providers (down from 3.33). While having a handful of providers continue to represent an important diversification strategy for the largest long-only managers, downward pressure on research budgets across the industry have tapered enthusiasm over the past 12 months to add more and more providers.

Nonetheless, despite the year-on-year direction of travel, larger managers are still associated with a higher number of providers than smaller managers. This is still down to the requirements associated with managing a larger multi-asset class portfolio. Looking beyond equity algorithms, the rise of algo use in the foreign exchange (FX) asset class has grown over the years for spot trading and, recently, has begun to extend to FX derivatives such as non-deliverable forwards. New regulations, such as the uncleared margin rules, are driving FX derivatives into the clearinghouse and fostering more electronic trading. The development of new algos is a natural extension of this phenomenon. Thus, it may be that these managers are holding the number of algo providers somewhat consistent while diversifying the types of algos used by asset class and strategy.

Analysing the number of providers chosen by long-only managers without segmenting results into AUM categories reveals some curious findings (Figure 4). Like last year, 2021’s survey suggests that long-only managers either go hard or go home when it comes to committing resources to providers. The proportion of participants indicating that one provider is sufficient has grown from around 19.86% in 2020 to just shy of 28.66% in 2021. This is in part driven by the growing familiarity and relationships between long-only managers and their providers.

The proportion of firms relying on five or more algo providers has fallen from 41.13% in 2020 to 32.54% in this year’s survey. The reason for this phenomenon is that cost pressures have pushed managers to consolidate and streamline their relationships, even though clearly a significant number of providers still see the diversification benefits of leveraging a handful of different algo providers.

The distribution of algo usage by value traded has changed considerably over the past year (Figure 5). The proportion of participants trading 80% or more of their portfolio via algo trading almost doubled from 10.98% in 2020 to 20.75% in 2021. At over a fifth of all long-only respondents to this year’s survey, this group of managers trading 80% + of their portfolio algorithmically now represents the largest proportion of survey participants. Additionally, the year-on-year increase for this group is the largest of any bracket. Long-only funds allocating 20% to 30% of their portfolio value into algos grew to 12.19%, up from 7.65% in 2020 in the second largest increase of any bracket. At the lower end of the spectrum, 6.82% of participants trade between 5% and 10% of their portfolio’s value using an algorithm (versus 8.43% a year ago). The most significant year-on-year decrease was seen in the 50% to 60% segment, which declined from 22.16% of long-only funds trading via algos last year to 9.65% in this year’s survey.

At first glance it seems that more firms are pushing a larger proportion of their book into algorithms and this is partly a consequence of the developments in technology and software that has enabled algo trading in equities as well as other asset classes. The percentages of funds trading via algos have risen since last year in the three largest categories: 60% to 70%, 70% to 80% and above 80%. All the same, the fact remains that the percentage of respondents trading 50% or more of their portfolio algorithmically has remained essentially the same: 49.41% versus 49.22% last year. This is a reminder that for all the benefits of algorithmic trading, the industry still values the role of human discretion and it remains the case that many instruments and asset classes do not lend themselves easily to algo trading.

Long-only managers were asked to select the types of algorithms they used from providers (Figure 6). Like last year, in 2021 the highest proportion of surveyed long-only funds chose dark liquidity seeking algos (59.78%). Further proposals by European regulators to further clamp-down on dark venue trading have led to resistance from many asset managers who have responded to public consultations to remind policymakers of the value that dark venue trading provides large buy-side managers. This is partly behind the continued high adoption of these kind of algos in recent years, though it is noticeable that the percentage choosing dark liquidity seeking algos has fallen by 13.16% from 72.94% in 2020. Clearly over the past year long-only firms have become mindful of a broader range of considerations when it comes to their choice of algo.

The percentage-of-participation algos rose to 56.96% from 49.02% last year, indicating strong preference for the ability to participate in volume at a user-defined rate. Two algos that have been in existence for years, volume weighted average price (VWAP) and time weighted average price (TWAP), both saw year-on-year increases in its adoption in this year’s survey coming in at 59.51% and 25.75% respectively. At a time of extreme market uncertainty and unpredictability, it is expected that participants turn to tried and tested methods of algo trading to navigate execution venues.