The TRADE > News > Buy-Side > Traders adapt to life at home 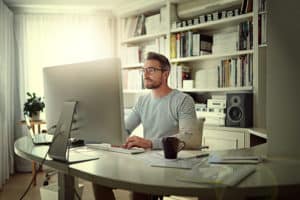 When news broke in early March that HSBC was forced to evacuate part of its trading floor in Canary Wharf after a worker tested positive for coronavirus, it became clear that this crisis was different. The days, even hours, that followed would see banks, brokers and buy-side split trading teams sending staff to work from home or at backup sites to ensure business continuity.

At the same time, non-essential travel bans were enforced across the industry, exchanges were forced to shut trading floors and shift to electronic trading, short selling activities across Europe were massively curbed, and doomsday predictions of an impending global recession had already hit headlines. It has been dramatic, to say the least.

It goes without saying that traders have been adapting to working and trading remotely in the current environment. As countries mandate employees work from home due to the COVID-19 pandemic, traders have set up remotely while trying to continue to perform their roles and duties as normal.

But the definition of normal has changed with trading floors closed, systems and technology tested and communication no longer occurring in-person. Early discussions with buy-side traders suggest that working from home is not ideal and more high-touch trading activity is taking place, as is often the case in times of market stress.

“To be honest, working from home has been miserable. But in terms of the set up for remote trading, the process so far has been quite smooth. The technology is so good these days,” says a UK-based buy-side head of trading speaking to The TRADE on condition of anonymity. “We’ve seen more high-touch trading as traders seek certainty and security in having an extra pair of eyes. As traders gain more confidence in the remote setup, I expect that will revert back to low-touch.”

A recent study from Refinitiv, which surveyed 400 of its FX trading clients globally, found that 80% of banks in Europe have opted to have staff split their working time between home and a separate office or backup site. Refinitiv explained that this highlights the ‘still somewhat dominant dependency of sell-side staff on trading desks and trading floors’ to ensure connectivity, compliance and efficiency of execution that is needed to perform their order-taking and execution roles.

Business continuity plans may never have stretched as far to encompass a global remote working environment, along with subsequent market turbulence and a full technology carryover for employees. For teams used to information sharing in a live format, particularly in markets that do not trade electronically as much as others do, the remote working environment could hamper now dispersed desks.

“For those who work in a dealing room or a trading floor, working from home is a massive change,” says one European buy-side head of trading who spoke to The TRADE on condition of anonymity. “The use of a laptop PC is particularly challenging when you trade multi-asset order flow in a multi-platform environment. This challenge has been exacerbated by highly volatile markets. All our team is adapting and learning, and it is becoming more flexible under pressure, for example by using much more telephone than before or by improving and customising the order management system’s layout on smaller screens.”

A report from consultancy Aite Group, which outlined the challenges and opportunities caused by COVID-19 pandemic, depicted front-office or trading tasks as more challenging to perform at home, adding that a higher degree of trade breaks and compliance challenges are possible if functions are somehow excluded or reduced in coverage.

Matt Simon, author of the report at Aite Group, explains that for traditional asset management firms, workflow of idea creation to trade implementation is often the result of a group interactive effort. Front-office staff must have regular meetings with both internal investment professionals and external companies and trading counterparts to guarantee optimal results.

Simon warns however, that replicating any of these tasks in a virtual-only environment reduces the number of interactions, and will most likely negatively influence human decisions that would be a part of the overall decision-making process.

Some asset managers have been quick-off-the-mark in terms of planning to ensure that traders can continue working from home without disruption, which was carried out rather smoothly. As Simon alludes, communication is key to this process.  Matthew McLoughlin, head of trading at Liontrust Asset Management, says his trading desk has been able to operate as normal. Echoing the thoughts of the European buy-side trading head on the increasing importance of picking up the phone, McLoughlin adds that in the current environment, execution is now taking longer.

“There has been more communication as I was very keen that we keep communication channels open and ensure there are no misunderstandings between teams or individuals,” McLoughlin tells The TRADE. “That being said, I have seen a large switch from phone to instant messaging across the market over the past few weeks, which has worked very well. Email traffic has increased too, but I have encouraged my team and others to pick up the phone if ever something needs clarifying as it just makes life easier and quicker.

“I have felt that despite everyone’s hard work, interactions on trades can take longer to happen, particularly on the more high-touch side of the business in both equities and credit. With people working from home, it just takes longer for a salesperson to speak to their trader and then feed that to a client on the other side and for all of that information to then eventually flow back to me. It hasn’t prevented us from doing business, and those partnerships that we enjoyed before are still there and still fruitful, but it just takes that little bit longer to do business on occasion.”

Not only is execution taking longer, it is also more expensive. According to a study from the brokerage and analytics division at Virtu Financial, following a spike in volatility and wider spreads in March, trading costs as captured by its ‘Global Peer Universe’ spiked significantly, with every region seeing a large increase in the first quarter this year.

Virtu found that US trading costs surged 42% in the first quarter compared to the quarter prior, with March costs increasing to a high of -63.7 bps. At the same time, trading costs in the UK surged 76% during the period, 55.2% in Europe – excluding the UK, and 78% in Asia Pacific – excluding Japan.

Ben Springett, head of European electronic and program trading at Jefferies, tells The TRADE that the shift to remote working combined with unprecedented levels of market volatility has driven a number of changes to the trading landscape, including in costs of trading.

During the most volatile periods, data from Jefferies shows a rise in the cost of execution by more than three times, despite an explosion of liquidity. Spreads more than tripled while volatility more than quintupled, and liquidity at the touch was down by a third, suggesting a reduction in market maker activity. Springett categorises the challenges with remote working into being infrastructure-related, and the other behavioural.

“Home working for traders was a rarity in the City prior to this, and as such, a huge amount of hardware was required to be sent to peoples’ houses to ensure they had remote access to trading capabilities and telephone,” Springett explains.

“Once the physical capability is in place people need to adapt their working practices to ensure that they can be as effective in a geographically fragmented organisation. Person-to-person directed communication is straightforward, but a significant value of trading floors comes from being immersed in conversations going on around oneself. It is the benefit of information being gleaned from these, as well as the ability to contribute to them, that is much harder to re-create at home.”

As the Aite Group report highlights, when putting together business continuity plans, few asset managers and banks ever dreamed of the implications of portfolio management or trade and trade-support scenarios all having to be done from a home office. Simon adds that given the volume of orders, messaging and trading, firms are clearly more error prone and risk vulnerable.

Echoing Springett’s concerns around the loss of vital information that could be used for investment and trading is John Ashworth, CEO of trading software provider Caplin. He explains that while this is less relevant due to the electronification of markets, the repercussions in the near-future could see the industry adopt a ‘new normal’ in remote working and trading.

“In days gone by, when trading rooms were noisy places, there was a huge amount of subliminal information contained in background noise that individual traders would absorb to inform trading decisions,” Ashworth explains.

“That effect is minimal nowadays since there’s so much electronic trading, but is still felt to some extent and will be missed amongst the very largest global banks and some super-regionals. My personal belief is that this enforced ‘new normal’ will lead to a dramatic change in the way managers manage, and how people view remote working.”

Complacency is not an option

But rules and regulations are still as important for traders working remotely as when they were in the office. UK market participants have been urged by regulators to continue capturing records and data as firms moved staff to alternative sites or working arrangements. Compliance technology provider Cappitech has warned on the risks and importance of maintaining regulatory obligations as traders are working from home.

“Working from home has become the most common approach for firms to mitigate the spread of the virus in their offices,” Cappitech said. “Although working from home is an option, it does have its pitfalls. Most financial regulators include telephone and electronic messaging record requirements. As such, companies need to confirm that remote work options include methods to comply with existing regulatory standards… The reality is that even the most prepared firms will have gaps in their contingency plans. One way to spot regulatory functions that aren’t being completed or that will need to be fixed in the future are through control tools.”

Regulators have provided various temporary relief measures globally for reporting and auditing, but they have been clear that the environment should be established by the trader or support staff as a means of ignoring ethical practise and securities rules. EU authorities have delayed best execution reporting requirements in Europe, while uncleared margin rules (UMR) and the Securities Financing Transactions Regulation (SFTR) have all been postponed as firms focus on handling the new business environment.

“Getting complacent is not an option. If you haven’t been monitoring and reporting on your activity you will be in trouble,” Matt Smith, CEO of compliance and data analytics provider SteelEye, tells The TRADE.

“Regulatory reporting and crucially, market abuse monitoring, still needs to be done, especially during this time. In fact, financial crime is more likely during uncertain times and we are seeing some very strange behaviour and non-standard trading patterns in the market. To combat this, the regulators have been very clear about the fact that firms are still firmly ‘on the hook’.”

This in-depth feature was produced for the preview edition of the TRADETech Daily, which can be viewed in full here.