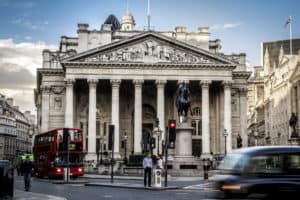 HM Treasury has introduced more sanctions designed to increase the economic pressure on Russia following its invasion of Ukraine.

As part of its extended sanction regime against Russia, the Treasury has placed a ban on UK investors from engaging in transactions with the Central Bank of the Russian Federation.

In addition to previously announced moves to prevent Russia from raising sovereign debt in the UK, the government has also introduced additional measures to present Russian companies from issuing transferable securities and money market instruments in the UK.

Further restrictions on Russian institutions were also among the changes, although these have not been disclosed.

The changes follow existing sanctions already placed on Russia and Russian institutions last week by the UK, Europe and the US.

Among the changes imposed by the UK is an asset freeze on Russia’s second-largest bank, VTB, while the London Stock Exchange Group (LSEG) confirmed on Friday that it had suspended all VTB trading on its markets with immediate effect. The US has frozen assets on both VTB and on Russia’s largest bank Sberbank, however, the EU and the UK are yet to follow suit.

The EU also froze assets from Russia’s central bank on Saturday and moved to prohibit several Russian banks from accessing SWIFT in a move that will likely prevent them operating in the global markets. These have not yet been disclosed.

“The Bank of England continues to take any and all actions needed to support the Government’s response to the Russian invasion of Ukraine,” said governor of the Bank of England, Andrew Bailey.

“We welcome the steps taken today by the UK Government, in coordination with EU and US authorities, as an important and powerful demonstration of the UK’s commitment to the international rule of law.”

The development comes as the Russian central bank doubled its interest rate on Monday morning in a bid to support the collapsing rouble, a move that was marginally successful – cushioning its dramatic fall to around 10% from a loss of 30% in morning trading. However, the ongoing volatility of the situation is likely to have a significant impact on the global foreign exchange markets.