The TRADE > News > Asset Classes > Derivatives > Is the US the ultimate winner in derivatives trading post-Brexit? 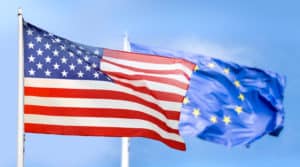 Around 80% of volumes in ITRAXX and credit default swaps (CDS) moved over to the US post-Brexit, confirmed Deutsche Bank’s head of electronic fixed income, platform, and listed derivatives sales, Mario Muth.

“Just after Brexit became effective there was a move to US trading venues particularly from non-EU participants,” Muth told The TRADE. “If you look at the UK and the EU they obviously don’t recognise each other’s regimes on the trading side. The US is recognised as equivalent and that’s where market participants have decided to interact as it’s the most open global market from an equivalence point of view.”

While he agreed these volumes were now fairly settled, Muth explained there are some proposed regulatory changes that have the potential to expand European access to the UK. The first is the potential removal of dollar and sterling swaps from the DTO, proposed earlier this year by the EU.

“Since the EU has removed these from the obligation European banks can engage with clients in the UK on UK venues so the overall impact is reduced,” he said. “It’s euro swaps and ITRAXX where we’re still restricted with regards to UK venues and of course these two are very important to us.”

European regulators have also proposed to suspend the DTO for market making activities as part of its review of Mifid and Emir. “If that becomes part of the law then there is the option for EU member states to suspend the DTO for very defined activity,” said Muth. “In effect it will open up the UK venues for European banks and create a level playing field allowing to interact with all global activity.”

Derivatives clearing, historically dominated by LCH, tells a different story. Following Brexit, UK CCPs were given an 18-month equivalence period. This was extended in March earlier this year when European regulators granted ICE Clear Europe, LCH and LME three-year equivalence until June 2025 to avoid a cliff-edge situation. However, it has been stressed that this grace period is purely to allow EU institutions to reduce their reliance on them.

Yet, the temporary equivalence poses the question, if EU banks are unable to access LCH would they be restricted from any trading activity? European institutions deal very little in dollar and sterling flow and so without access to non-EU clearing houses, European banks could be set to lose out on those transactions too.

Even before this equivalence was granted in March, institutions migrated their flow over to Europe to avoid a cliff-edge situation, Muth explained.

“The efficiency of central clearing works best if all activity is in one clearinghouse, but the market is big enough to have multiple CCPs be liquid enough to be credible offerings. Each clearinghouse has a niche. CME is strong in dollar products of course. Eurex will be stronger in European products. LCH has traditionally been the leader in the overall share. There is no significant impact to liquidity if the current activity its split a bit more and of course we expect clearing volumes across the industry to grow,” said Muth.

Whether or not Eurex is up to the challenge of absorbing derivatives clearing volumes is also a question being asked by many. Typically, LCH has dominated this space meaning Eurex may not have the infrastructure or experience to assume control of sheer volume of flow it looks after.

“We remain committed to support achieving the regulatory objectives to bring more euro clearing into the EU with our market led solution, helping the market transition into a more balanced and less concentrated environment,” said Matthias Graulich, member of the executive board at Eurex Clearing. “To further boost the EU clearing ecosystem, we also support measures which support a market led approach by mobilising activity of EU based market participants (including public entities) but at the same time ensuring that EU based market participants can compete effectively in a global environment.”

Eurex’s flow is not as balanced as LCH’s, remarked Muth, and this became evident when interest rate hikes began taking place in Europe, causing the 10-year point at Eurex to develop significantly in March and April.

“Mortgage hedges are usually around the 10-year point as that tends to be the average maturity of a typical mortgage book. Offsets usually come from hedge funds or pension funds, but those are currently in LCH,” said Muth. “It shows that Eurex’s composition of flow is not yet as balanced as LCH’s and that the main task now is bringing a little bit more balance of flow into Eurex so it has more of the same dynamics that LCH have had for years.”