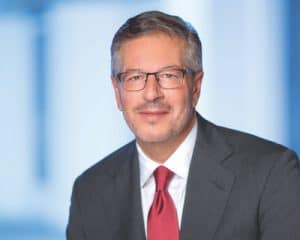 Tradeweb’s co-founder and chief executive officer, Lee Olesky, has stepped back from the helm in a bid to support the fixed income trade execution platform’s next stage of growth.

Replacing Olesky is current Tradeweb Markets president, William Hult, who has been with Tradeweb since 2000 and in his current role since 2008, responsible for the growth of the company’s mortgages and wholesale electronic trading marketplaces.

Olesky will assume the role of chairman of the board later this month and step down from his role as chief executive on 31 December later this year.

He has been chief executive of the company since 2008 after co-founding it with Jim Toffey 25 years ago and has been instrumental in its growth to one of the incumbent fixed income electronic trading platforms in the market alongside the likes of MarketAxess and Bloomberg.

The change of leadership follows the news earlier this month that Tradeweb surpassed $1 billion in annual revenues for the first time last year, driven by average daily trading volume of more than $1 trillion.

“Since we started Tradeweb in 1996, I am enormously proud of how the company has continued to evolve on a near-constant basis,” Olesky said.

“From a FinTech start-up to a $20 billion company, what I am most proud of is the team of people I have been so fortunate to associate with over the last two decades. It is their professionalism, hard work and exceptional talent that have provided the engine of growth and created a culture of excellence at Tradeweb.”

Tradeweb has announced several other senior leadership changes including the departure of chairman Martin Brand who has stepped down after three years in his role and the appointment of director, Paula Madoff, as its board’s lead independent director.

“Collaboration is a big part of how we work with clients and colleagues at Tradeweb, and that really started with Lee at the top,” said Hult. “I appreciate having Lee in the office next door for a little longer as we work together to ensure a seamless transition.”

« Prop traders turn away from FX in 2022, report finds