Major custodian banks have highlighted outsourced trading as one of the most in-demand services from buy-side clients during the COVID-19 pandemic.

Speaking with The TRADE, a handful of service providers including Northern Trust, State Street and BNP Paribas have pointed to an uptick in demand for outsourced trading and dealing that began before the crisis and has now accelerated during.

The case for outsourcing trading has strengthened in recent years as notable benefits have come to the fore in an environment that has seen a shift from active to passive management, increased regulations and squeezed margins for asset managers facing pressure over their fees and costs.

Subsequently, custodians have joined a range of other independent firms in setting up outsourced trading desks. The move shows a diversification in their offerings as securities services providers have been forced to evolve from relying solely on custody-related offerings to thrive.

“Where we’ve seen a surge of interest – which has accelerated during the pandemic – is clients trending towards different ways of outsourcing their trading,” said Nadine Chakar, executive vice president and head of State Street Global Markets.  “This could be from moving into new asset classes or trading strategies. Outsourcing their trading gives them access to new markets, asset classes, network of brokers. You get 24/7 coverage, every single asset class under the sun.

“Over the past year we’ve seen trading that originally was held by fund houses who thought they could make a difference trading – as that was their secret sauce – slowly but surely, with the markets becoming more efficient and transparent, they finding that’s not the case.”

Things will continue to ramp up

With the back- and middle-office traditionally outsourced, the evolution of front-office outsourcing is aimed at helping asset managers of all shapes and sizes source liquidity and market access, and the largest of custodians also give economies of scale.

These large institutions have a presence throughout the world and have been able to offer dedicated front-office services by asset class or region to asset managers that don’t necessarily want to outsource the entire desk.

For smaller asset managers in particular, anonymity created through a typical outsourced trading arrangement could prove useful in terms of minimising market impact, reducing information leakage and preserving alpha. Such an arrangement also removes the need to establish separate and individual relationships with brokers, which can often be legally complex, costly, and difficult to both attain and maintain due to potentially lower business flowing from smaller funds.

“Over the past month in particular, we have seen a strong uptick in demand from asset managers and asset owners, who are faced with increased volumes and resiliency issues linked to the COVID-19 crisis and are thinking now might be the time to look at outsourcing solutions,” said Thomas Castiel, head of dealing services at BNP Paribas Securities Services.

Of the 50-plus clients it has, almost 20% came in the first quarter of this year, Pete Cherecwich, president of corporate and institutional services at Northern Trust, explained to The TRADE.

“This is because organisations have outsourced middle-office, administration, now what about the trading desk?” he added. “What I think is going to happen is people are going to look at the outsourcers [during the pandemic], and say you’ve passed the test, you’ve continued trading and done well during this’. In fact, they realise we’re doubling down on investments in terms of making sure that our clients have the network.”

“Things got pretty nasty in the market in terms of market values, so managers are going to be under the gun from a profitability standpoint, they are going to lose a lot of revenue. I believe that will continue and we will see a ramp up, there’s no question in my mind about this.”

The decision on whether to outsource or not can often depend on the size and situation of the asset manager. It’s more likely that smaller asset managers will outsource given their own capabilities and networks weighed up against a large custodian operation.

The all-in costs to establish and maintain a three-person dealing desk, according to industry estimates, are up to £1.5 million per year, including compensation, technology, software, Bloomberg Terminals, data feeds, storage, and all the other elements required to operate an efficient desk.

In addition, The TRADE recently wrote that industry estimates predict that by 2022 at least 20% of investment managers with assets under management more than $50 billion will outsource some portion of their trading operations.

“Some clients have said they want to outsource their whole trading desk to us, others just want to use us as a counterpart,” added Cherecwich. “They might be fine executing Australian equities, but they don’t like people staying up at night to executive US equities so want to outsource stuff that’s on the other side of the world. The problems are different: it could be staffing around the world, it could systems, resiliency and it could just be that someone doesn’t feel it’s a core competency and they’re not getting alpha so they want to give it to someone that will continue to invest in this. That’s what happened to fund accounting, and even custody.”

One example of this has been Hermes Investment Management, now known as Federated Hermes, a UK-based asset manager with $575 billion in assets under management, which has long-been an outspoken advocate for the hybrid trading desk model after entering into an agreement with CF Global to form a desk focused on emerging market and non-Japan Asia equities.

According to Federated Hermes, the decision to outsource was taken primarily for the investment teams trading outside of UK times zones. Equity transactions related to Asian and emerging markets portfolios are executed by CF Global and all other transactions are dealt with by Federated Hermes’ in-house dealing team.

Despite the benefits of the outsourced desk being clear to smaller managers, Federated Hermes is a case of a larger investment manager adopting the concept, something BNP Paribas’ Castiel is also seeing.

“In addition to hedge funds and boutique asset managers, which were early adopters, we now see larger investment managers looking to outsource their dealing operations to support their development across regions and asset classes with a cost-effective solution.” 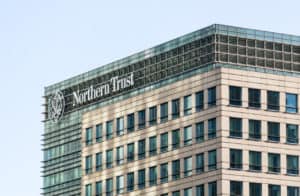 Outsourced trading has been described by Northern Trust as the “third wave” of outsourcing which will not only include the trading desks of buy-side firms but all front-office functions, such as foreign exchange and transition management.

European asset managers have been significantly impacted by MiFID II in recent years, while the shift from active to passive management also adds to the case for an outsourced desk. Meanwhile, costs for North American asset managers have increased by an average of 5% per-year, and 6% in the last 12 months, according to McKinsey. Figures from Morningstar and Mercer also predict a 35% fall in active management revenues by 2023.

A subsequent report from Northern Trust also forecast potential cost savings of 25% from outsourced trading among asset managers and asset owners, which can be achieved through reduced headcount and reduced technology, transaction and regulatory costs.

Much like any outsourcing trend, the removal of the trading desk within an asset manager can lead to lost jobs, which has caused controversy around the concept of delegating front-office duties. Trading desks are full of highly-skilled, and often competitive, teams who have built up reputations over decades of performance.

Speaking at TradeTech Europe in April 2019, the head of trading at $975 billion asset management firm Invesco, told delegates during an Oxford-style debate that, at this stage, his firm would not consider outsourcing its execution processes as he didn’t believe an outsourced trading provider could execute better than his traders can. “I would say some of the traders we have are best-of-breed anyway,” he said. “We’ve got the experience, the technological back-up as well, we’ve got the systems and the support, so, no, we wouldn’t consider outsourcing our trading.”

For custodians, outsourced trading is a relatively new service, but one that both Cherecwich and Chakar believe has stood up to the task during recent market volatility, and subsequently there could be an additional surge of business once the crisis is over, in addition to the aforementioned boost during.

“The biggest testimony on our ability to operate is what we’re going through right now,” said State Street’s Chakar. “Whether it’s trade outsourcing, doing a secondary check on NAVs, the whole front-to-back outsourcing, honestly our approach is that no ask is small enough or big enough. We step up when it matters. That’s what you want from your global custodian, we are the fortress of safety.”