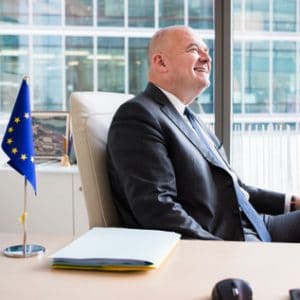 Hayley McDowell: Euronext had a prolific year in terms of acquisitions and investment in 2017, as well as several major product launches. How are those performing?

Stéphane Boujnah: Euronext is fundamentally different from what it was a year ago and 2017 was a transformational year for the company with major projects both completed and ongoing. We acquired FastMatch in August 17 and expanded our offering into global forex markets. FastMatch has cutting-edge technology as the fastest growing communication network in foreign exchange markets. The good news is that the business side there is developing well. We are cross-selling the FastMatch offering into European markets with an increasing part of that business now being rolled out to major European bank centres. Secondly, we acquired the Irish Stock Exchange (ISE), which we announced in November and will close hopefully in March this year. This is a very interesting acquisition because not only is it a great company with a superb management team in a country with significant positive growth prospects, but it’s an acquisition that provides several benefits to us. It demonstrates the Euronext federal model is attractive to independent exchanges that want to keep their identity within the federal governance model. In addition, this acquisition makes us less dependent on volume driven businesses. ISE is a global leader in debt and fund listing, so with that business we are less exposed to volatility trading and more independent from volumes.

The third pillar of our strategy expressed last year was that we significantly invested in non-volume rate businesses to structure a comprehensive offering of corporate services with several bolt-on acquisitions. These were made in order to provide our issuers clients with a range of tools to assist them with market challenges. We are very happy with all of the acquisitions and investments we made last year, and so far they are all performing very well. There were other projects that were very important for Euronext in 2017, including our clearing deal with LCH SA where we swapped our 2.3% stake in LCH Group for 11.1% stake in LCH SA, and we signed a ten year clearing of financial securities agreement. This is not as good as owning LCH SA as we tried to do at the beginning of 2017, but the situation is much better than where we were at the end of 2016. With all of these acquisitions we have paved the way for an even stronger future at Euronext.

HM: Euronext also ventured into major agreements with firms across the industry like Morningstar and Algomi. How have those projects developed?

SB: There were several joint agreements we entered into last year, including with Morningstar where we are developing European indices for blue chips. We recently launched the Morningstar Eurozone 50 index, and the first futures contracts on that index were launched in January. This was critical ambition for us and the deal with Morningstar was all about the development of new indices so we could trade them. With Algomi, things are going well and the European multilateral trading facility (MTF) is live and approved by the Financial Conduct Authority (FCA), and approval from the US regulator is ongoing. We are now in the commercial phase of that project, bringing more and more participants to the platform. On top of those projects, we have also launched regulatory services to support clients with MiFID II reporting requirements. Our two services including the approved publication arrangement (APA) and approved reporting mechanism (ARM) are continuing to service our clients and attract new business.

Euronext also entered the blockchain world. But we’ve tried to do something very operational and concrete. We have created a joint venture called Liquidshare with BNP Paribas, Société Générale, Euroclear and others across Europe, to develop blockchain driven post-trade solutions for small and medium sized enterprises (SMEs). This independent start-up company has management, equity, P&L plans and we’ll see whether the investment we made in an operating blockchain technology establishes us competitively in the market.

HM: Can we expect this momentum to continue in 2018? What are the main focuses for the business this year?

SB: Absolutely. The financial performance of 2017 has been very strong, but what you will see is that the numbers in 2017 do not reflect yet what we created last year in terms of value for 2018 and 2019. All of those acquisitions and investments we have discussed are going to yield and produce revenues in 2018 and 2019. The acquisition of the ISE will close in March and we are expecting to deliver €6 million of synergies to transform the profile of the company out of the migration of the current platform in the next three years. The various other initiatives with Morningstar and Algomi are gathering client traction. We are confident on the growth of those various acquisitions and initiatives next year. For 2018, Euronext Optiq will reach another major milestone with the cash platform going live in the first half of the year. The platform is already live for market data, but the big migration for replacement of our cash platform will take place this year. This innovation will also trigger the launch of an MTF for ETFs, which will likely happen in the second half of 2018.

MiFID II will begin to impact the industry in 2018. We truly believe that MiFID II is beneficial to us in terms of revenue model. There are still some loopholes that need to be addressed by the regulator, in particular in terms of the scope of the systematic internalisers (SIs) and how the recent developments with SIs fit with the initial objectives of MiFID II. MiFID I was all about increasing competition, whereas MiFID II is all about creating transparency. Some players used the opportunities to open up competition on the assumption that they were not transparent markets, but we believe competition is better in a transparent environment.

HM: How has the Euronext Block MTF performed under MiFID II so far this year?

SB: Euronext Block offers potential for price discovery and price improvement and full use of the large in scale waiver under MiFID II. All trades will sit outside of the impending double volume caps. We are very competitive from a fee perspective. We have  strong local relationships that we are leveraging  to capture incremental liquidity. We are confident in developing this beyond the basic competition and existing block venues.

HM: How do you think the acquisition of ISE positions Euronext for Brexit?

SB: Let me underline, because this is important, that we decided to acquire the ISE irrespective of Brexit. Ireland is a great country with a 3.8% growth prospect in 2018. The ISE is a great company with fantastic management and product offering that will contribute to the diversification of our volume driven line.

It’s pretty clear now that in a post-Brexit world, whatever that may look like, that four cities are going to receive substance from the City of London players who will have to relocate to the European Union in order to provide financial services to European clients. Those four cities are Frankfurt, Paris, Amsterdam and Dublin. Out of those four cities, three of them (Amsterdam, Paris and Dublin) are in the Euronext family. I do believe those four cities are all very different, have their specificities and are fundamentally adapted and convenient for different players. So there won’t be a single winner in the post-Brexit world, but there will be distributed financial centres within the European Union. In this respect Dublin is a very important location due to the strength of the asset management industry there and the fact it is a plug and play location for anyone who takes the decision later than others to relocate. We are very happy that three of the main cities that are going to benefit from the relocation of various financial services operators from London, for a variety of reasons, are part of the Euronext Group.

Brexit offers stronger optionality but at this stage I don’t know what is going to happen. We don’t believe the equivalence regime will operate as it does today and will provide a backdoor to the single market, but also, it seems that the concept of delegation of contracts won’t be as easy as it would have been in the past. Clearly if anyone wants to sell financial services within the European Union to the 450 million customers with the pool of savings attached to them, they will have to consider relocating some of their operations dedicated to this market. At the same time we are trying to make sure the banks and industry in London, which will remain important, can continue to have access to the Euronext platform as market participants just like those in the rest of the world. We believe London will remain an important financial centre, albeit structured differently in the way it is today, but we will continue to grow our operations in London. We are in the process of hiring a new CEO of Euronext London right now and believe me I want to recruit a man or woman with strong sales skills and gravitas in the City of London business community. So we are not discounting our London operation - on the contrary.

HM: How do you hope the future of clearing will play out in Europe once the UK leaves the European Union?

SB: What I know is that there is a proposal on the table put forward by the European Commission and they have told the UK “if Brexit does not mean Brexit for clearing, then you can continue to clear Euro-denominated assets in London - as long as you abide with the rules applying to those in the European Union and you accept the provision of the European Central Bank”. But the Commission said also “if Brexit does mean Brexit, even for clearing, then those operations will be relocated to a legal space that is consistent with the EU’s approach to risk management”.

Frankly, I don’t know what the status of that debate is within the UK because it is one component of a wider British debate around the limits of Brexit. I understand it is an issue constantly debated amongst EU leaders as well as within the UK and it’s an  issue that goes far beyond the issue of clearing. Therefore, I can’t really answer the question because the answer is in the wider debate that is up to British democracy.

HM: What would the impact be if clearing did leave London?

SB: There will be financial cost - but you know what, Brexit is incurring costs everywhere. Big decisions, big consequences, big costs. It’s a dis-synergetic project. When you break liquidity you create incremental costs. There has been a clear political choice to go towards fragmentation, whatever the cost is, so we shouldn’t consider there is any way out of these fundamental contradictions. Brexit cannot be implemented without any form of fragmentation. So in terms of clearing, it will mean fragmentation of liquidity. However it’s up to the leaders to make up their minds as to the consequences for London. What the final direction will be is very unclear to me. In four months time, two years after the referendum it seems that still no fundamental choice has been made.

But I want to reiterate that Euronext and Europe are well and truly back. When you think about when Euronext had its initial public offering (IPO) in 2014 less than four years ago, the market capitalisation was €1.4 billion and today it’s €4 billion. What this company has achieved in terms of demonstrating it can be independent, its performance is truly amazing. The recovery story since it became independent is one of the defining moments of the exchange group.