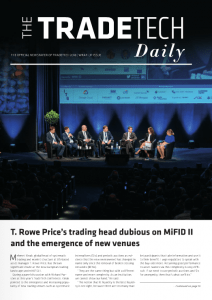 The Eurostar back to London after a few days in Paris is always a bit of a strange journey, particularly when you’ve been surrounded by colleagues and industry peers for 48 hours, only to then find yourself with over two hours of downtime as you cross under the English Channel.

And so, having rushed from the closing stages of this year’s TradeTech conference to Gare du Nord in time to catch my train back to London, I finally had time to digest the experience and sift through my thoughts.

The big – and obvious – question leading up to this year’s edition of TradeTech would be how the industry had been able to adapt to, or at least cope with, the long-awaited arrival of MiFID II. In recent years it has felt as if conference attendees were somewhat frozen in time, all awaiting the same day when the clocks would resuming ticking and everybody could move forward again.

Now that fated date had passed and with the first few months under the collective belt, it’s reassuring to see that the dialogue has moved on and those speakers on the buy-side were largely positive on the new equities trading landscape. Of course, there were also conflicting opinions on offer, which you may have already noticed from the front page of this issue.

There certainly was a different atmosphere to this year’s conference in comparison to the last few years, not least in the sense that many sponsors had clearly pumped more money into their stands and the exhibition hall felt fuller than in previous years. Although for some reason you still can’t get a decent cup of coffee at this event. Take note, organisers.

Even more heartening to see where the number of copies of the TRADETech Daily delegates were shuttling around the event or poring over in between sessions. For us, the TradeTech conference began weeks before 25 April in putting together the issue and it continues after the event, with this wrap-up edition that pulls together all of our coverage of this year’s conference.

Inside this issue you’ll find reporting on keynote discussion panels and speeches dissecting the new MiFID II landscape and the trading venues it has given rise to, as well as the latest developments in trading technologies, which thankfully do not focus on blockchain for a change.

So until next year, it’s au revior Paris and TradeTech 2018, but the wider discussions on the new trading landscape continues to roll onwards.